Listening to the news last weekend and last Monday, it sounded like disaster was imminent. Schools were shut down, public transit was suspended, and people were encouraged to remain at home if at all possible to avoid the life-threatening storm that was going to hit Monday night and continue through Tuesday.

Like most of the news commentators mentioned, the storm didn’t quite turn out as expected. I think I was listening to NPR when I heard an announcer mention the actual snow totals in New York City. He then made the comment, “Do you know what we call that in Chicago? Tuesday.” I laughed, remembering how I’d gone out on Tuesday to grab a few odds and ends for making tacos. There was a good bit of snow and the sidewalks were slippery, but it wasn’t that serious.

The Bronx received more snow than anywhere else in the city at 8″ of accumulation. Watching from my living room window, I could see that the wind was pretty bad at times, but it wasn’t quite what I was expecting. I kept thinking about the blizzard in January of 2015 as a point of reference. The oddest thing about the day was how quiet it was. There was very little traffic, there weren’t many pedestrians, and the few trains that passed our station went by slowly and quietly, with no announcements. My apartment overlooks a train line. After living here for a year, I don’t really notice the sound of the trains, but I noticed when the sound stopped. 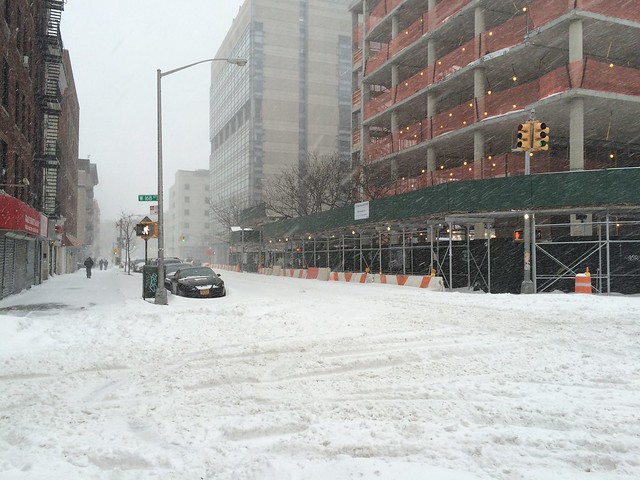 //embedr.flickr.com/assets/client-code.jsWednesday was probably worse than Tuesday. The snow had partially melted because of sleet and rain and had frozen overnight on the sidewalks. The corners, where the pedestrian crossings are, were huge puddles of slush. Hopefully, this will be the last snow we see this year. I’m ready for spring.