I rarely use Facebook, partly because it eats up a lot of time but mostly because I started to realize just how much Facebook was doing with and profiting from my personal data. It’s creepy. So, I cut back my Facebook time to about 30 – 40 minutes every month or so. I’m not keeping up with everything on Facebook anymore and sometimes I wish I could when it comes to family, but Facebook really isn’t about family updates anymore and hasn’t been for a long time so I don’t really feel as guilty about walking away from it as I might have 10 years ago.

With everything going on with the election and the inauguration, alternative social media platforms have been getting a lot of sun. I’m always keen to try out new platforms, mostly to see if there are any great memes, but I hadn’t heard of MeWe so I decided to give it a try. It’s surprisingly well put together and fun to use, once I got over the learning curve and figured out which groups to avoid.

There are, however, some really basic things wrong with MeWe that are surprising. Here are three things I’ve noticed so far:

I don’t want to use Facebook, but the alternatives really make it hard to settle in with glaringly obvious problems that should have been addressed a long, long time ago. MeWe isn’t brand new after all.

I’m reminded of how Signal is just now trying to add custom backgrounds and more customization options after this influx of users. They’re going to lose out to Telegram, which isn’t as secure, because it’s just more user friendly and more fun to use, because they didn’t take the initiative. It’s also possible to search for public channels or chat groups, which Signal doesn’t seem to support.

I submitted feedback about those issues more than once over the time I’ve been using the app. Now, the Signal boat is sinking and they’re trying to bail it out with new features rushed out in their beta version while people are choosing whether to hop on board or swim to the Telegram boat. I wonder how you explain that to all of the people who donated to Signal to create an exceptional and secure messaging app? That they created a product that lost out to another messaging app run by a Russian oligarch as a pet project?

I think I’m going to wind up using MeWe mostly for a handful of groups and some personal updates, but probably nothing too personal. I didn’t even sign up with my full name. The way that social media is being weaponized now is honestly terrifying and has a chilling effect on speech. Something you say today that is conventional might become a weapon to attack you in 10 years.

I think the 2020s are going to be a time when people take a step back and anonymize and the web goes back to how it was in 90s, before every post and comment online became part of a global ePeen contest. If we can get around current government and corporate efforts to prevent that from happening anyway. I imagine they want and need the US to move more towards a blending of offline and online identities leading to a shadow social scoring system. Sometimes I wonder if there isn’t one already in place.

Like many people, I managed to get hooked into some games on Facebook.  You know the kind.  Cheesy flash games that mostly have no point, purpose, or conclusion.  Their goal is to get you to play as many hours as possible, and eventually to get you to spend real money on the game.  Or in other words, they’re a time-sink and a money waster.

The games that I took to are Zynga games.  They’re pretty polished.  When I first started playing them they really weren’t that bad.  Lately, though, they’re chock full of pop-ups demanding that you ‘share! share! share!’ everything you do.  Not to mention the ‘Become a Fan!’ and ‘Add More Friends!’ pop-ups.  There are so many of these pop-ups that the slight entertainment value is rapidly disappearing.  If you open one of their games and then let it sit for a few minutes, you might come back to a stack of half a dozen pop-ups wanting you to publish things to your Newsfeed or add friends.

Zynga’s applications, and other players, generate quite a bit of ‘noise’ already in notifications, requests, and my newsfeed.  Why would I want even more ‘noise’ in my e-mail inbox?  As a cheap incentive, most of Zynga’s games are offering special items or bonuses for giving up your e-mail address.  I think my time and privacy is worth more than a special fish or a few extra game coins.  I’ll be keeping my e-mail address to myself Zynga.  Thanks, but no thanks.

In addition to all the noise Zynga games create, they’re big time-sinks.  I realized that I have to give up some of these games if I want to be able to do other things I enjoy, like reading the news, studying, exercising, eating, etc.

So, to that end, I’m putting FishVille and PetVille on the chopping block.  I’ll also be cutting back on the amount of space I use to ‘grow’ crops in FarmVille and the amount of time I invest into it as well.  There are more important things in life than fake fish, a fake pet (I already have two real ones that are a handful), and fake crops.

Hey FishVille! So long, and thanks for all the fish!  In memory of my fish tanks, some screenshots: 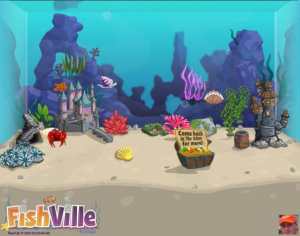 The only one that really has me hooked is Cafe World.  I’ve always been a sucker for cooking in games. I even had maxed cooking skill in Final Fantasy XI.  What I like about Cafe World is that it’s possible to get by without having to spend real cash.  What I don’t like about it is the number of pop-ups.  ‘Become a Fan’ it says, when I already am.  ‘Add More Friends’ it demands, when all the friends that want to play the damn thing already are.  It’s going to wear out its welcome soon too, if that keeps up.

Keep pushing the limit Zynga.  If I can quit playing World of Warcraft, don’t think I can’t give you up.

I remember asking myself this question a few times, but not any time recently.

When the internet first became popular, and I was delving into the world of AOL chat rooms, the people on the other end of the screen names popping up on my monitor seemed… well, impersonal.  It was always like talking to a group of random strangers, and the idea of making friends with people I’d never met in person was ridiculous.

Well, that was 13 years ago. The times, and my opinion, have both changed.  I’m sure that most people who have grown up with internet access would find it odd to not make and keep online friends.  It seems only natural nowadays to stumble across an interesting person, strike up a conversation, and create a lasting relationship.

I have plenty of friends that I’ve never seen in person, but have known for a long time through various methods of internet communication.  In fact, one of my oldest friends is a friend I made through an online game called Dark Age of Camelot.  We’ve been chatting off and on for about 7 years.  I’ve never know anyone else outside of my family for that long.  I also still communicate with the people I played World of Warcraft with two years ago.

I suppose you could say, “Well how well do you really know these people?”  Sure, that’s a good point.  How well can you know someone who you only communicate with via the internet?  A person can tell you one thing but actually do another, and you’d never know since you weren’t there.  But, I suppose that takes a leap of faith initially, and a little trust.  Also, with the more recent explosion of “real time” social networks (think Twitter) it’s becoming easier to get to know a person you’ve never met.

People Tweet about all kinds of things, from what they have in the morning, to what they do at work, to the last time they were able to successfully take a crap.  That’s pretty personal.  On top of that, people Tweet photos and videos.  I think there are even geo-tagged Tweets now?  Also, programs like Google Latitude are becoming popular.  It’s becoming more and more simple to connect and get to know your online friends.

So, I would have to say that I know plenty of people that I would think of as friends, that I’ve only chatted with online.  What’s your take on it?  Have any interesting stories to share about meeting people online?  Or do you think it’s bad or dangerous?