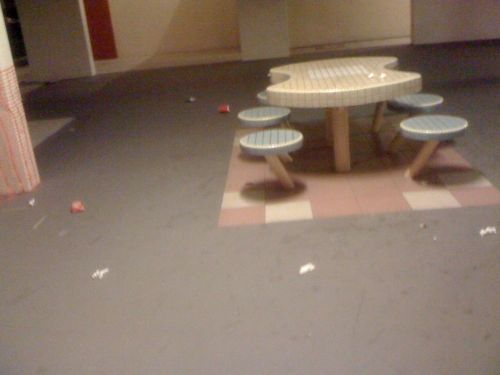 One of the things that Singapore is known for is its cleanliness, so why is it being treated so badly? Look at this mess! This is a sitting area below an HDB block. It’s regularly like this as well.

I’m sure the first thing someone will want to say is, “There are lots of foreigners! It must be the foreigners!” I don’ think so though. I think it’s kids that aren’t being properly disciplined and taught to take care of their surroundings. I see kids sitting there all the time, hanging out smoking and listening to music with their friends.

Of course there’s going to be a some litter, regardless of where you are. Even the cleanest parts of Singapore are a tad dirty, but this is just excessive. There’s really no excuse for it. It’s simple laziness and a lack of caring. Or perhaps they just don’t give a shit, because they know that some poor foreign worker will come along and clean it up?

Coraline isn’t going to be released in theaters in Singapore until September 17th, 2009, but I managed to get a copy early and my wife and I watched it tonight. I have to say I’m quite impressed with it. First of all, it’s visually stunning! These snapshots are a little fuzzy because I took them without pausing the video, but you’ll get the idea:

When I first saw advertisements for Coraline, the story sounded really interesting and I wasn’t disappointed in the least. I’m not sure if this is supposed to be a kid’s movie or not, but it has a lot of deeper meanings and reminds me of classic fairy tales, where there’s always a lesson to be learned. Also in line with classic fairy tales the story has a dark, grim side to it.

Without spoiling the entire thing for a person who hasn’t seen it, the main character is named… Coraline of course! Coraline and her parents move to an old house for reasons that are never divulged. Shortly after moving in she encounters a strange young boy that lives nearby named Whirbie. The next day, he delivers a 100-year-old doll to her that mysteriously looks exactly like her. This doll will cause Coraline to open Pandora’s box (or in this case a tiny door) and send her on a wild and dangerous adventure.

Other things that I’d like to point out are that the characters in this movie are very well thought-out. They have depth and are all very entertaining. Also, I’m going to start looking for a way to get my hands on the original soundtrack. The music was spot-on and did a great job in setting the mood. Oh, and can I mention the great animation again? It really is fantastic. And it’s not just the animation quality either. The use of color and imagery will keep your eyes darting around the screen constantly.

This is a definite must see, whether you have kids or not!