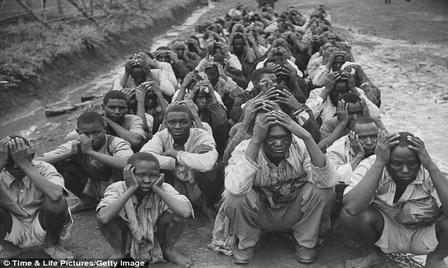 David Anderson’s article, “Mau Mau in the High Court and the ‘Lost’ British Empire Archive,” uses a potential lawsuit against the British government by survivors of the detention camps in Kenya to analyze the difficulty that historians face in gaining access to historical documents. He details the struggle that the prosecution went through to obtain access to documents that were removed from Kenya during the decolonization process, which ultimately raises questions about the British Empire’s supposed “civilizing mission” in the colonized world. If the British were the standard of moral and just behavior, what did they need to hide?

Not all of the documents removed from Kenya related specifically to the detention camps, but many did. These documents were removed because they might “embarrass” the British government, implying that the people in charge knew that what they were doing was outside the bounds of acceptable behavior. Anderson mentions many documents where individuals specifically raised concerns about practices in the detention camps. Anderson also points out that Governor Baring was aware of the activities going on in the prisons, so why was nothing done to stop it? The implication is that this was state-sanctioned violence rather than aberrant individual behavior. The removal of the files and their subsequently being “lost” also speak volumes about the British government’s need to hide what had happened there.

John Lonsdale’s “Mau Maus of the Mind: Making Mau Mau and Remaking Kenya,” is a very abstract and theoretical examination of what Mau Mau meant to different people. He opens his article by asking why Mau Mau as a resistance movement has come to be seen as somehow peculiarly evil or unnatural in comparison to other similar movements. He shows that the myth surrounding the reality of the movement grew because of how Mau Mau was used to justify and reinforce existing borders. For example, he looks at the political divide between conservatives and liberals and shows how conservatives used the Mau Mau movement and sporadic acts of violence to reinforce an image of white civilization at war with black savagery. The liberals, on the other hand, looked at Mau Mau as the embodiment of childishness and immaturity, and believed they could “fix” the problem by assimilating the locals into Western culture.

One of the more interesting aspects of Mau Mau that Lonsdale analyzes is the way it was perceived by locals. If it was a resistance movement, why were all Kikuyu not onboard with the ideology? Why was it seen as evil by locals as well? Lonsdale shows how, rather than being representative of Kikuyu culture, the way that Mau Mau operated undermined traditional boundaries and norms. In her article, “The Mau Mau Rebellion, Kikuyu Women, and Social Change,” Cora Ann Presley builds on this idea of Mau Mau not representing local culture by showing how people were forced to provide support or face physical abuse and possibly death. Presley is specifically analyzing the role that women played in the Mau Mau movement, to show that women were not passive actors and had an active role in the movement. She uses survivor testimony to build her argument and complicate an oversimplified narrative. She shows that some women were active and eager participants, while others were threatened into providing support.

One issue that could use more explanation is the significance of oaths in Mau Mau culture, and perhaps in British culture during the time period examined. Why were oaths so powerful? Lonsdale approaches Mau Mau oaths in a psychological and sociological way, but provides no background on the types of oaths normally taken or used in Kikuyu society. Also absent from these narratives is what the oaths were. One of Presley’s interviewees refused to speak about it. What was the text of the oath? Why is the act of taking the oath in the first place given more weight than what they were being asked or made to swear to?