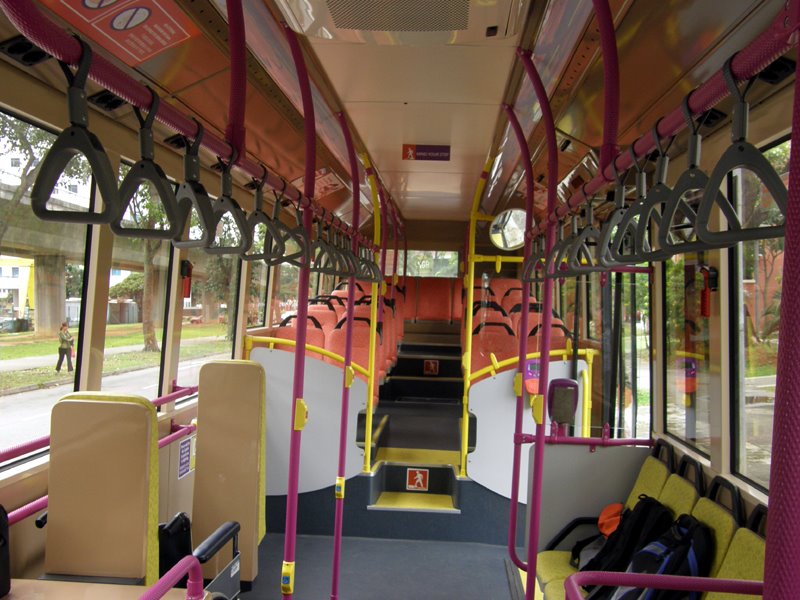 On Friday afternoon I was on the bus, heading to the MRT station so I could meet my wife for dinner. I was on a single story bus in the standing area, leaning against the padded rest.

(For those of you not familiar with Singapore buses, I found the photo at left on Jom Naik Bas!, which seems to be a blog dedicated to reviewing modes of transportation, mostly in the Malaysia/Singapore area.)

So, anyway, I was standing there, leaning against that rest and chatting with my wife via SMS. There were two kids playing around in front of me (towards the rear of the bus). I wasn’t paying much attention to them, but after a brief stop, when the bus lurched back into motion, the kids stumbled. Like I said, they were goofing off, being noisy, and they weren’t holding onto anything. So, one of the kids stumbles and stomps down on my foot. I was only wearing slippers (flip-flops), and the boy had rubber shoes on, so it hurt. I wasn’t that upset about it because it was an accident, so I stood there, looking at the kid, waiting.

What was I waiting for? Can you guess? Well, apparently the boy didn’t know or care, because instead of doing what was proper, he glanced at me briefly and then went back to playing. His mother, who was sitting to my right and saw the whole thing, didn’t bother to speak up either.

I closed the cover on my iPhone and put it in my pocket and then I leaned towards the boy and said, loudly enough for his failure of a mother to hear as well, “You know, the polite thing to do when you step on someone’s foot is to apologize.“

The kid looked at me as if he were shocked. Is it so uncommon a thing to ask people to be polite to each other? No reaction from the mother. Perhaps she doesn’t care about what her child learns? I bet she would have reacted if I had simply reached out and smacked the boy in the back of the head. That probably would have made headlines here. I can see it now: “Ang moh asshole abuses boy on bus for stomping his foot and not saying sorry.”

Anyhow, the boy looked at me, all shocked, and said, “Oh, sorry.” Then returned to playing with his friend. I was satisfied at the time, but later I would remember that honorifics are used in this country. I don’t exactly think of myself as an “uncle“, though I’ve been referred to that way before by kids that are about 10, but a “Sorry, sir” or a “Sorry, uncle” would have sounded much more convincing to me.

The kid is probably already spoiled if he’s that indifferent to other people’s space, or to the fact that he caused injury to another person. I blame his parents, and I blame society. This is where it starts. The kid doing something wrong and the parent not correcting them, or no one correcting them. This leads to a self-centered “me me me” attitude that produces kids who think they walk on water, foreigners are trash, and anyone who does an “un-glam” job is a failure.

There will be a lot of wailing and gnashing of teeth when that bubble bursts.