One of the best parts about this trip was running around town finding different foods to eat.  While we were there we ate at quite a few different restaurants, not all of them Thai.  I think we probably could have found better food if we’d gone to a less touristy part of Thailand, but we made do with what we had available to us.

We weren’t sure where to go on the first day we were there so we wound up walking around quite a while.  We finally wound up eating in the restaurant where we took the cat photos in the previous post.  I still don’t know the name of the place.  We couldn’t find it again.  It was nice though:

The sad thing is that the food from this place was great, and I’d liked to have gone back.  Here are some pictures of the dishes: 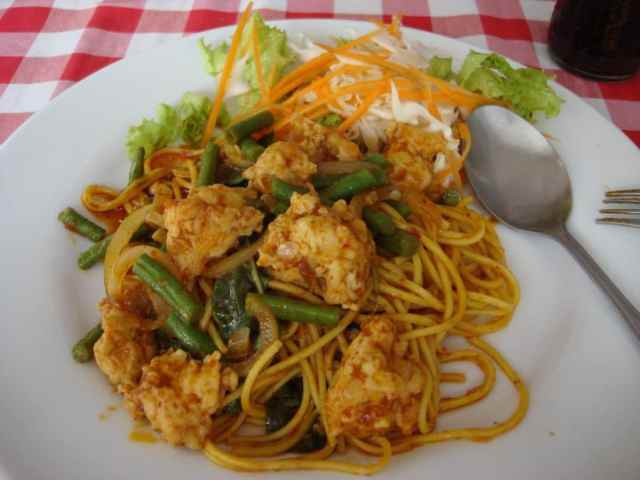 This one is yellow curry chicken. It was a lot better than I expected. In the photo, the chicken somehow came out looking crisp, but it was actually tender. There was no coating, other than the curry sauce. I think it looks like that because it was torn by hand before being cooked. The noodles were al dente. I liked that. I can’t stand mushy noodles. Oh, and she let me choose how spicy I wanted it, so I went with ‘medium’ to be on the safe side!

This dish is called sukiyaki.  My wife says it’s actually a Japanese dish, but she wanted to try out the Thai version of it.  She didn’t have any complaints.

Later that evening we were looking for a snack when we saw something familiar.  It was a hawker style eating area.  There were only two stalls and a seating area, but they were serving chicken & rice and roast pork & rice.  We decided to give it a try to see how it compared with what we were used to eating in Singapore (those are very common dishes in Singapore but in Singapore the names exclude the ‘&’). 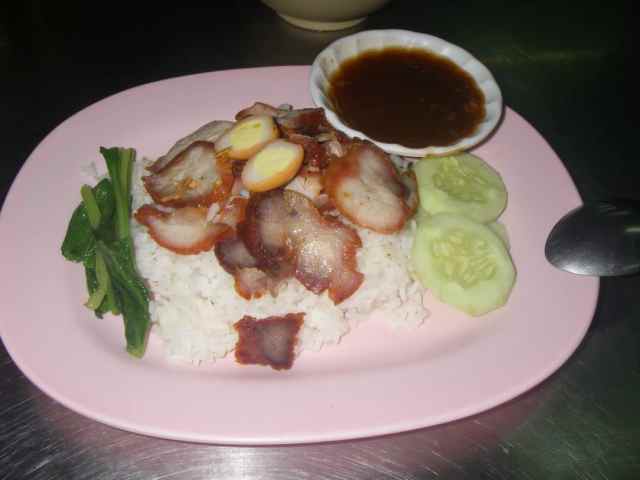 It seems to be pretty much the same, except there are two choices (though extra small portions) of vegetable and a quail egg.  Instead of a broth soup, there was a dip for the meat.  The table also had other sauces, chilis, and dips to choose from.  It was significantly cheaper though at 40 baht (1.17 USD / .82 EUR / 1.69 SGD).  The same meal is about twice as much in Singapore, probably due to import fees placed by companies and the government.

Even later that same night, we decided to go out for a late dinner (at midnight) and some beers!  So, we stopped at one of the street restaurants.  These places set up every evening and pack up everything when they close, including tables, chairs, and cooking equipment.  The food was better than I expected it to be.

This is chicken, pork, and beef satay with peanut sauce.  It was hard to tell the difference between the three meats, and I teased my wife that maybe it was all cat.

This was grilled squid and was really really good!  It came with a spicy dip that I wish I knew the recipe for.  I would go back to this place just for this dish.

We topped our meal off with two Heinekens and then called it a night.

I would say our first day, as far as meals go, was a success.