Are you serious? In this day and age a web service is still requiring a mail in form to verify age?  In fact, I’ve never heard of that before.  The closest I’ve ever seen was being required by Funcom to mail in a scanned copy of my driver’s license and the credit card I used to verify my identity when opening an Age of Conan account. Ya, I fell victim to that failed attempt at a game, but that’s another story…

Anyhow, in an attempt to put my content out in a few more places to draw people in to my main blog I figured… ‘Xanga… why not?’ and posted some stuff there.  I surfed around a bit and wound up clicking on a profile image in a comment section (I admit it, I was drawn in by the picture of the butt) and I was asked to verify my age.  So, I clicked Verify, and instead of just accepting what I said like most web services do, Xanga then prompted me to actually physically print a form out and mail it to them. 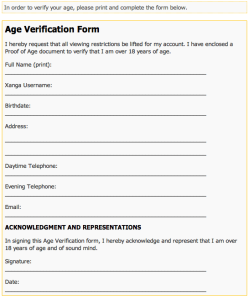 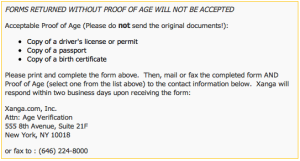 Honestly, I was stunned.

What do you think about this policy?  Is it a step backwards and a way to alienate users, or is it a surefire way to ensure that you won’t be sued?  (Because we all know that you won’t mail in a copy of your older friend’s driver’s license).