While we were in Kuala Lumpur over the weekend we decided to go down to KLCC to look around and have dinner.  We weren’t sure what we wanted to eat but as we were looking at the electronic store guide I saw that there was a California Pizza Kitchen in the mall.

Neither of us had ever eaten there before so we gave it a try, with mixed results. 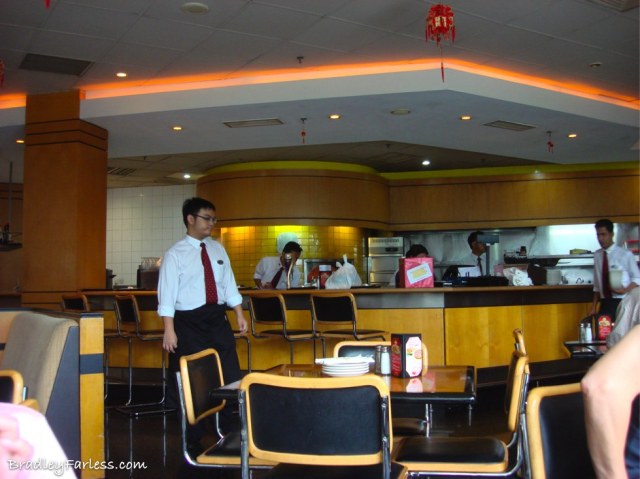 The ambience is very, very nice.  The place has a clean, uncluttered, modern look that was refreshing and relaxing.  Also, the service staff was incredibly friendly and helpful.  No complaints there.

The food wasn’t too bad, I guess, but what bothered me about it is that everything was incredibly oily.

The first thing we ordered was an appetizer.  I think it was called an ‘avocado turkey bacon roll’ or something along those lines.  It’s the first item on the menu under appetizers.  It was described as a fusion between Eastern and Western flavors and was basically a cheesy, gooey, extra greasy egg roll.

While eating the thing the hot grease was running out of the roll all over my fingers and forming a small puddle on my plate.  That’s a definite no go.  Also, the taste of the oil was a bit overpowering, to the point that I couldn’t even distinguish the taste of the avocado.

In fact, in this second photo you can actually see the grease dripping from it.

Shortly after finishing the appetizer the pizza showed up.  We got a thin crust ‘Sicilian’ pizza.  Thin crust pizzas are usually less greasy than full crust pizzas.  Unfortunately that’s not the case with CPK’s thin crusts.  It was oily as well.  We went ahead and finished the pizza, but after the second slice I could’ve walked away from it.

My wife and I have changed our eating habits over the last year and we’re consuming less and less oily foods.  It’s better for us, and less oily foods taste better anyway.  I was reminded again of how good Trattoria’s pizzas are in that 313 @ Somerset mall in Singapore.  CPK’s offering wasn’t even in the same league and cost nearly the same price.