If you’ve ever tried to list something publicly to sell it, you’ve probably had a similar experience.  I doubt many of you have had to deal with this level of annoyance though.

Just to give a little background, last month I sold a Nokia e51 I had sitting in a drawer, because, well it was just sitting in a drawer.  I use my iPhone all the time now and there was no point in keeping the thing around.  I could use the money for other things.

Anyhow, I listed the thing on Singapore’s eBay and the following is a conversation I had with a prospective buyer: 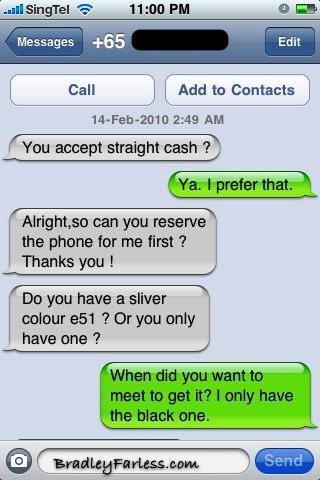 First off, note the time that this guy sent me this SMS.  This was a Saturday night, sure, and we were still up, but who in their right mind sends an SMS to someone about an eBay listing at that time of the morning?  Also, the listing made it clear that I was selling the phone and not representative of a company, so why did he think I had multiple color versions of the phone laying around to sell off?

When I put this phone up for sale I anticipated that I might encounter some less than bright questions or behavior, but this guy seriously tested my patience, as you’ll see as the conversation continues.  I tried my best to humor him, because it was my goal to sell the phone.  I figured I could always post screenshots of the conversation later.

I stated the condition quite clearly in the item description in the eBay listing, and simply repeated it to him. 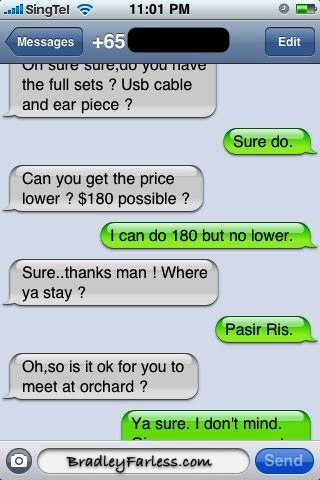 On the eBay listing I posted the low end of the bidding at 185 and the high end at 200.  I thought the point of setting those figures was so that people would know immediately what your “best price” is, but… guess not.  I let him have his 5 dollar discount because I figured he would feel like he won something and stop being so troublesome.

His question about my age threw me off guard.  I couldn’t figure out what bearing that had on selling a phone, or why he would think it was appropriate to ask.  Later, I realized that it was a calculated question.  He was trying to do a quick mental calculation to see if I was potentially easy to rip off.  That’s probably why he kept going on and on and on too.  Trying to wear me down to just give up and sell it for a lower price. 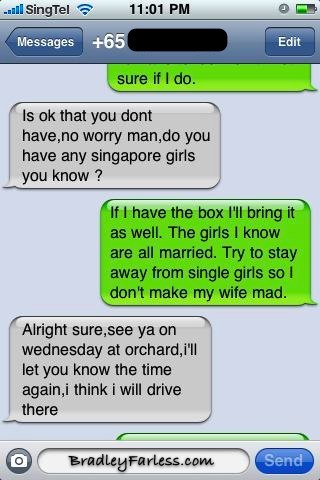 Still trying to be polite and conversational here, so I deflected his question, but I was pretty sure my eBay listing was for a Nokia e51 and not pimping services.

If you’re from the US and wondering about the ‘Happy New Year’, this was right around the Chinese Lunar New Year.

So, if you notice the timestamp, this was two days later, again at an inappropriate time of the night for him to be sending me a text message. Regardless, I took the opportunity to tell him that I’d gathered the stuff for the phone together, and hoped he would stop fucking around and just agree to meet and buy the thing. 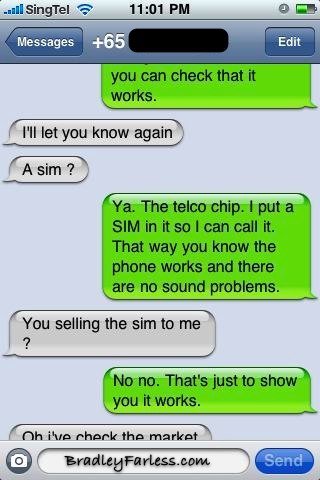 I thought I was pretty clear about why the SIM was in the phone.

This is when I realized this guy was just trying to screw me over.  First off, I’d looked around and roughly 180 SGD was the average price for a used e51, both here in Singapore and in other countries around the region.  Second off, this guy was trying to get me to sell it to him for what a pawn shop would give me for one.  That’s some pretty flawed logic, and I was insulted that he thought I was that stupid.  It was also pretty obvious that he didn’t work for a shop, for a number of reasons, and that this was just a ploy to try to get me to sell the phone to him for a ridiculously low price.

I felt like I was in a video game and he was trying to use a special attack on me or something: “Barrage of Stupidity! Go!” 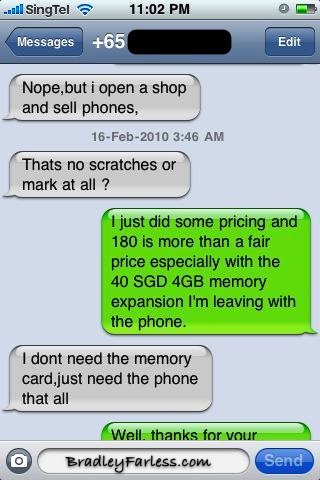 There’s a time stamp here because I decided to ignore him.  I wasn’t going to play that kind of stupid game.  Sure enough, he messaged again and then launched right into another ploy.  The phone was worth 180 without the 4 GB memory card in it.  I just left that in there to act as an added incentive, so someone would choose to buy my e51 over another sellers.  That should be obvious, so I don’t know why this guy thought I’d keep a 4 GB memory card I’d have no use for and then let him rip me off on the price.

By the way, I think I’m being generous calling this person a guy, because it seems more like I was talking to a boy of about 16, trying to lie and cheat his way into a good deal on a phone because 130 bucks was all mama would give him. 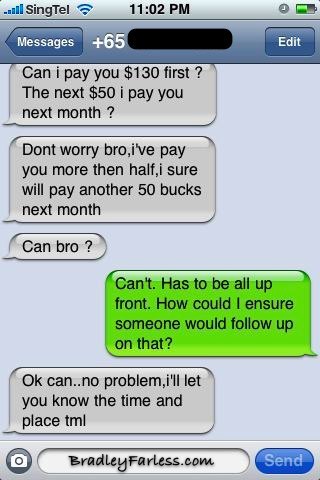 I decided to just ignore him and sure enough, he started SMSing again.  Then, as you can see at the end of this screenshot, he launched right into another game.

So, now all of a sudden I’m his “bro” and since we’re such good “bros” I should let him pay me part-now / part-later and because he’s my “bro” I’ll just be able to trust that he’ll pay me the rest?

Of course, the guy never sent me another message after that, since it was obvious I wasn’t going to sell him the phone for 130, or let him trick me into giving it to him for 130.

I feel sad when I see that people this annoying and retarded manage to survive, but it did teach me a few important lessons.  When I listed the phone on eBay the second time I left a VERY detailed list of what came with the phone, what didn’t come with the phone, what time to message me and not message me and I made it very clear what the “best” price was.  I had a few more people try this same bullshit on me but I didn’t bother with it again.  I wasted enough of my monthly limit of SMS messages on this one fool already.

This whole “best” price thing is something that annoys the hell out of me.  It’s not local to Singapore, but this is the first place I’ve had to deal with it with any regularity. Singaporeans are so hellbent on getting a “best price” that even if you tell them that what you asked for initially is the “best price”, they’ll think you’re just playing hard to get and keep trying to haggle with you, or start playing games like the jackass in these screenshots did.

The day after I listed it for the second time I was contacted by a very polite woman who met me at Tampines, looked over the phone and handed over the asking price without trying to find out the “best price”, so I gave it to her for 10 SGD less than what I was asking for, out of thanks for her being so pleasant.