A few weeks ago, my wife told me she’d signed us up for a running event called Run350.  It was encouraged among NTUC employees, since it was a Young NTUC sponsored event.  The purpose of the run was to gain attention for climate change.  The atmospheric carbon dioxide for February 2010 was 389.91 parts per million, which is far above the safe upper limit of 350, which is where the run got its name.

The event was fairly well organized.  The only real problem was that on-site storage of goods wasn’t available, so if you didn’t have someone along to just hold your stuff while you ran, you had to go light, which is what we did.  Even though we could bring everything that was completely necessary in our pockets it was annoying, because it didn’t even afford us the convenience of a towel to dry our faces with after the event.  Thankfully we don’t live that far from Pulau Ubin anyway, so the trip home was pretty short.

Pulau Ubin itself is an island off the coast of Singapore’s mainland.  To get to it we had to take a ferry from Changi Point Jetty.  That was pretty cool and almost made the whole trip worth it on its own.  I hadn’t been on a boat of any kind in a long, long time. 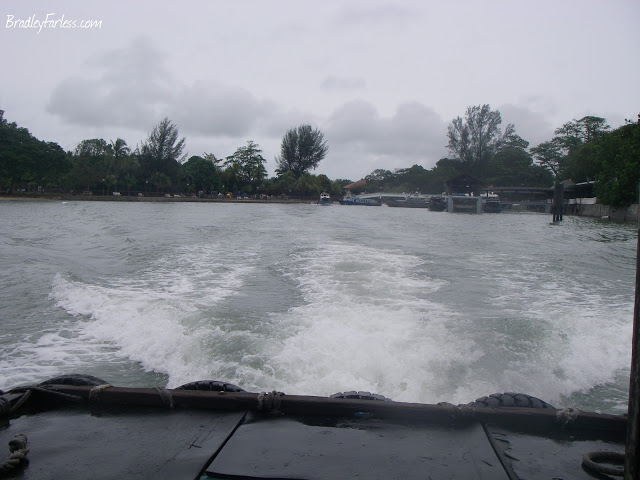 The ferries each carry a group of 12, which still leaves plenty of space on the benches.  As you can see, the sky was overcast.  There was a steady drizzle up until about 15 minutes before the 5k run started.  That helped keep it cool but it also made it incredibly humid. 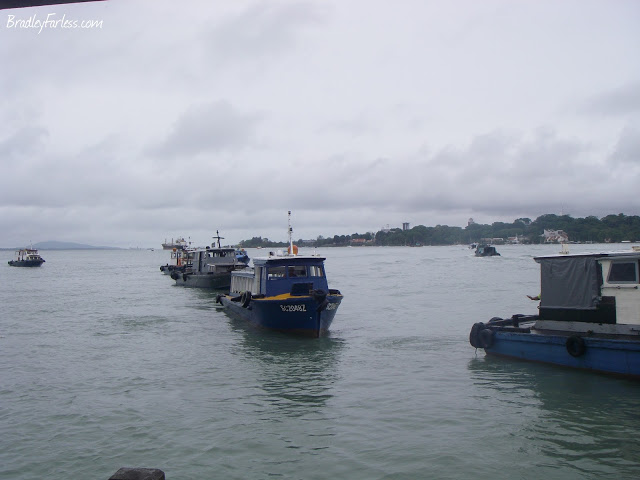 Approximately 1000 people attended this event, and at 12 per ferry it took quite a few trips to get everyone to the island.  You can see the ferries lined up to dock at Pulau Ubin above.  To the right of the photo, in the background, you can see a ferry heading back to the mainland to get more people.

The boarding of the ferries was really well organized, with staff and volunteers directing one group at a time down through the departure area and out onto the pier.  It would’ve been madness to have a huge group of people pushing and shoving on the pier and someone would’ve wound up in the water.

That’s me, standing by the welcome sign by the jetty on the island.  The shirts aren’t too bad and the print actually matched my regular running shorts. Double win.

Pulau Ubin itself is like another country when you compare it to the regular, sterile areas of Singapore.  When I first saw it, I was reminded of Malaysia, or even Patong Beach in Phuket, Thailand.  There were a lot of stray dogs wandering around, which added to the liveliness of the area, just like at Patong Beach.

The whole atmosphere is very relaxing and we’re going to make plans to go back on another weekend.  Getting there from our place only costs about 1.50 in fare, not counting the ferry price of course.  On the island you can rent a bicycle for about 2 dollars for the whole day and there are cheap places to eat if you’re not bringing your own food.

I had my wife’s waterproof camera out while we were running, thinking I would get some good photos, but I only managed to take one before I realized I needed to focus.  I run 5k regularly, but dodging people and a bunch of hills really wore me out.  There was one hill in particular that was pretty steep.  Almost every in front of me was stopping to walk to the top after going about halfway up.  It gave me flashbacks to what was called “Canyon Runs” when I was in the Army at Ft. Bliss.  Ft. Bliss is situated at the southern tip of the Rocky Mountains and there’s a road that runs up the side of it that company commanders think is a great PT challenge to undertake about once every two or three months.

In the end, we still finished the 5k in about 33 minutes, despite the heat, humidity, hills, and navigating around the other runners.  It wasn’t a race and there were no prizes, but I wanted to do my best anyway.

I found out later that I’m in the photo that goes with the ChannelNewsAsia story about the event.  I’m also in their video, which is linked to from the article: 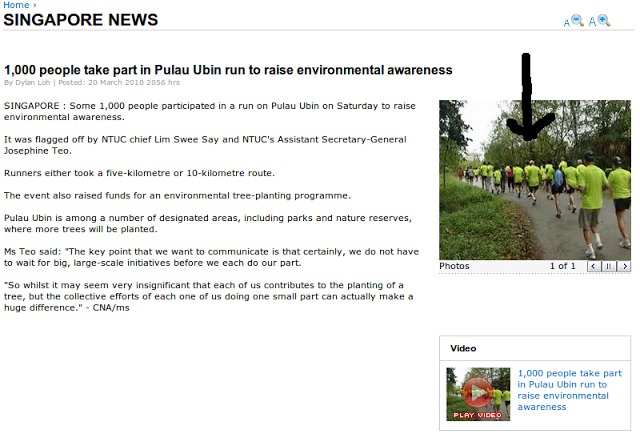 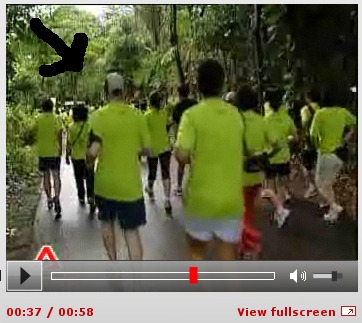 I wanted to embed the video, but ChannelNewsAsia’s site doesn’t allow it for some reason. Too bad… can’t even save a copy.

Anyhow, it was my first organized run (outside of the Army), an opportunity to see a new part of Singapore and an overall great experience!

Update: The event organizers managed to get a copy of the ChannelNewsAsia video up on YouTube so I’m embedding it here. I’m in it at 37 seconds on the left, in the tan and black hat.

Update (September 11, 2013): While editing bad formatting after importing this post from Blogger to WordPress, I noticed that Channel News Asia has removed the original article and the link is dead. As a safety precaution, I uploaded a copy of the video to my blog, in case the YouTube video eventually goes down as well.