Last Friday my wife and I went to see the Radio City Music Hall Christmas Spectacular, starring the Rockettes. It wound up being a really great experience and it was a great way to spend the Friday before Christmas weekend.

I saw the show once before, in 2006, and I was amazed by just how much the show has improved since then. The most memorable moment for me from the previous show was the toy soldiers. I was in the Army at the time and I remember being impressed by just how precise their marching movements were. I was sitting in the first mezzanine so I had the advantage of watching the turns and wheels from above. I’d marched in more than a few parades and military ceremonies so I had personal experience for comparison and the Rockettes were definitely better at it than anyone I knew. They work harder at perfecting parade marching too, though. 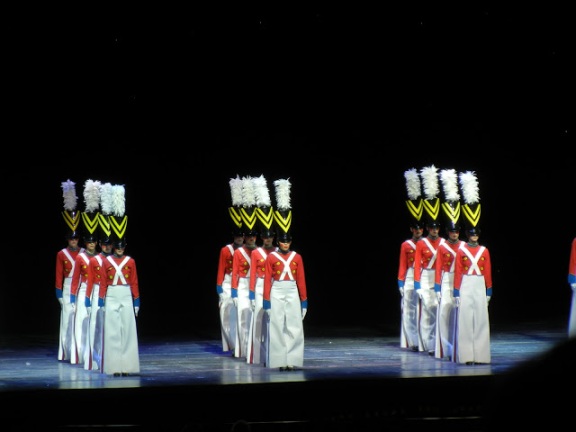 This year, the toy soldier segment was just as much fun to watch, but we were sitting in the Orchestra, so the precision of the marching wasn’t as readily apparent. I almost wish I’d picked mezzanine seats instead! We were able to see the finale to the toy soldier portion just fine though:

There were a lot of changes to the show. I think I remember seeing the dance with dozens of Santas in 2006, but this year there was a segment meant to imitate the Rockettes traveling through the city in a tour bus, a portion that simulated a video game and even some 3D stuff that was a lot of fun.

Overall, the show was a very fun and very memorable way for my wife to spend her first Christmas in New York City. We’re looking forward to going again in a few years.

For a full album of pictures (with descriptions) from the show, click here. The album is on Google+ and won’t require a sign in to view.