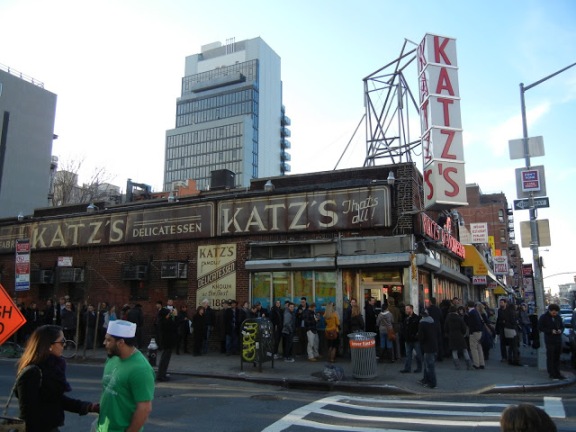 I have the vaguest recollection of eating at Katz’s Delicatessen as a kid.  The place has been open, in the spot, since 1888 and is frequently visited by famous people.  The walls inside are covered by pictures of notable diners, like Johnny Depp for instance.  Today my wife and I decided to go down there and give it a try.

Despite the hype, we were not prepared for the line we saw when we passed the end of the last block.  Both facades of the restaurant were covered by the lines of people.  The line going down Houston (on the right in the picture) was for take-out; the line going down Ludlow was for dine-in.  Like my wife said, “Thank God for smart-phones.”

The wait wasn’t as bad as we thought it would be, but the line outside wasn’t a line for a table.  It was a line for another line.  Well, really it was for the set of lines where you line up to get your sandwich.  Also for the line where you line up to get a drink.  On one hand, the madness and the business of the set-up adds to the excitement of eating there.  On the other, it was very time consuming.  I suppose there isn’t a faster way to do it though.  Table service would likely take even longer.  My only real gripe was that there was just one guy at the soda/fries (and other extras) counter, which made that a really, really long wait to just get two cans of soda.

Complaints aside, the wait was worth it.  The food is awesome and you get a huge portion.  One sandwich is enough for two people, unless you’re starving to death.  I have half of the sandwich I ordered sitting on my table next to me, still waiting to be eaten.  I had to go ask for a sheet of wax paper so I could wrap it up to bring it home.  The prices aren’t that bad for what we got.  The sandwiches pictured above are pastrami on rye.  I think they were about 15.75 apiece.

If you’re visiting New York City (or if you live here and just haven’t gone yet) and you’re doing the food tourism thing, pizza isn’t the only must-have while you’re here.  Definitely do stop by Katz’s.  It’s worth the time and money.  Oh, and one last thing: Dr. Brown’s root beer kicks ass!

3 thoughts on “Katz’s Delicatessen: Awesome Sandwiches, Well Worth It!”