Yesterday I went to Petco at Union Square to pick up two 20 pound boxes of cat litter while they were on sale.  Carrying that cat litter was a pain in the ass because I couldn’t get a cab and had to take the bus, but that’s another story.

On the way to Petco, I noticed a lot of people standing around the 14th street side of Union Square with signs.  I’m not surprised.  It seems like there’s a protest there at least once a month or more.  There was a protest there over the Trayvon Martin incident, for example. 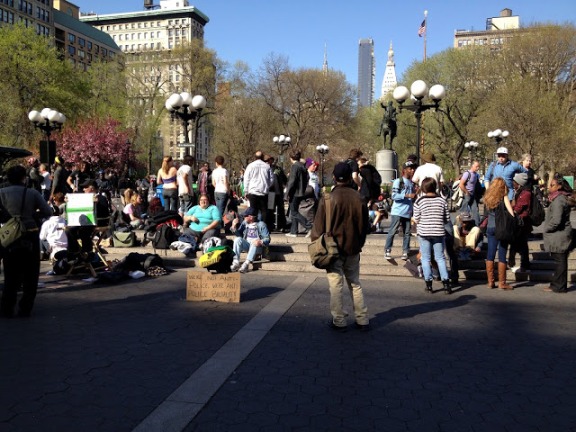 I can only assume this group is protesting police brutality, but I didn’t stop to ask for specifics.  There was something about the way most of the people looked, the way they carried themselves, that screamed low class and potentially dangerous.  One guy looked homeless and the girl in the purple tube top (just to the right of the pink tree on the left of the photo) kept pulling her top up and down, like she was moments from stripping naked to add flavor to the protest.  I wondered if they were drunk or on drugs.  I know it’s not good to just throw a judgment out there based on how people look, but on the other hand, if you want to be taken seriously, you should look serious. 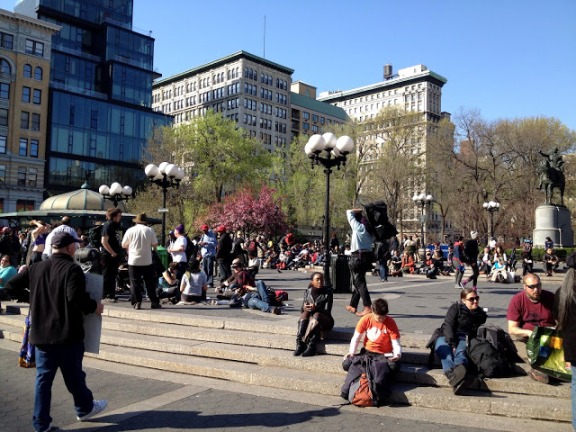 The group of people protesting wasn’t actually that large.  It’s hard to tell from the photos where the protesters end and the normal Union Square crowd begins, but they mostly seemed to be huddled into one corner near that pagoda subway entrance.

There were police hanging around and I had things to do so I just minded my own business and kept going.  The reason I wonder if these people are trying to ‘occupy’ Union Square is because I saw them there again today, including the guy that looks homeless.  He had a ruck sack with what looked like a yoga mat.  Maybe he slept on it?  Also, a few of them seemed to have luggage with them (right side in above photo).  The police were still there today too.

One thought on “Occupy Union Square?”