(For more on Schindler’s List, also check out this additional post that summarizes common criticism’s of the movie.) 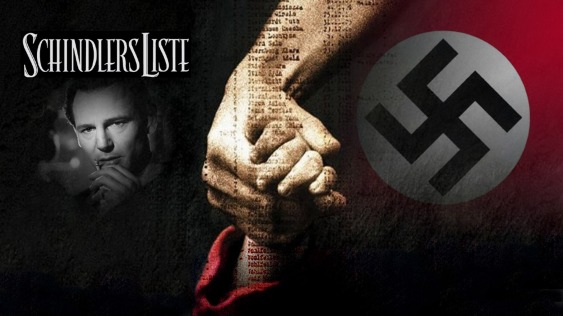 Schindler’s List is a movie by Steven Spielberg that was released in 1993. The movie is based loosely on a book written by Thomas Keneally, which is also called Schindler’s List. The book, in turn, is based on the eyewitness testimony of Holocaust survivors who were saved by the actions of Oskar Schindler, a German industrialist and member of the Nazi Party who used his position and influence to turn his enamelware manufacturing labor camp into a refuge for Jews. The movie attempts to track the course of these events while also showing Schindler’s inner transformation from a cold, calculating businessman into a savior. The events depicted in the movie take place near the end of World War II in Kraków and later in the Płaszów labor/concentration camp, both of which are in Poland.

Various methods were used to turn this semi-historical information into an entertaining movie. Spielberg’s choice of coloring in the film was very intentional. Schindler’s List was designed in a way to make the audience feel as though they were viewing something historically accurate and making the film (mostly) black and white, rather than color, was a deliberate and effective means of making that connection. This was probably done to connect emotionally with the viewer and pull him or her along as the story progresses.  Spielberg also set up his characters in an oppositional way that is simple and easy to understand, probably to appeal to a wider audience, and reinforced this image of good vs. evil through the use of light and dark imagery.

Schindler’s List is almost entirely shot in black and white, but there are scenes that are in color for added effect. The opening scene of the movie is in full color and shows a Jewish family lighting the Shabbat candles on a Friday evening. As the candles burn down and the flame goes out, the film transitions to full black and white. The point of this switch to black and white is to give the movie a documentary-style feel, to impress upon the viewer the historical reality of what is being depicted and more easily elicit an emotional response. I won’t go into the problem of presenting fictionalized material in a way that makes it appear to be completely historically accurate here. Essentially, what Spielberg has done is make it easier for the audience to empathize with people they know are real. The climax of this effective use of color is in the final scenes, when the characters in black and white transition to the actual living survivors when the film was shot. They are shown moving across a field and then moving forward in a line to lay flowers on the grave of Oskar Schindler. That scene completes the emotional connection and reinforces the power of what the audience just saw in the rest of the film.

The most famous use of color in the film is the “girl in the red coat” in the Kraków ghetto liquidation scene. In this scene, everything is black and white except for the coat a little girl is wearing. The camera follows her as she walks down a street and adults are gunned down behind her and in front of her. This is meant to draw the audience’s attention and probably to emphasize the innocence of the children who suffered through this event. The next time the audience sees the red coat the little girl was wearing is when it is in a pile in a wheelbarrow. The audience is left to draw the conclusion that she no longer needs it anymore, because she is dead. Another instance of coloring in the film is during the Friday Shabbat candle lighting ceremony in Schindler’s factory. Schindler not only gives permission to, but insists that the rabbi in the factory welcome the Sabbath. During this scene, the flames of the candle are in color again, like they were in the opening scene of the movie. This may indicate a restoration of the Jewish people, through Schindler’s respect for them as human beings.

Color also plays an important role in the depiction of characters in the film, primarily in the use of shadows on their faces. This ties in with the essentially oppositional nature of the main characters in the film: Oskar Schindler and Amon Goeth. To make this film more easily understood by a wider audience, Spielberg created a good vs. evil paradigm that posits Schindler as the hero and Goeth as the bad guy. Schindler is the troubled hero who starts out selfish and uninterested in others, much like Spiderman. Like Peter Parker, Schindler has to experience a traumatic event before he changes his mind about the Jewish people and uses his power for good. Like Parker’s uncle Ben, Schindler has the one-armed man and the girl in the red coat, among others. Schindler’s path to heroism is painted in a very easily understood way. Goeth is presented as an ultimate evil, a man that is beyond the bounds of sanity. He even has an evil sounding accent and an army of evil henchmen (the camp guards). To take the comic-book reference a bit further, we can think of Helen Hirsch as the damsel in distress that the hero, Schindler, rescues from the bad guy, Goeth.

This set-up of hero and villain is reinforced throughout the film by facial lighting effects. When Schindler is introduced, he is dark and mysterious and his face isn’t shown in full. When he is doing something negative, his face is in shadows. For example, when a Jewish woman shows up at his office to ask for his help, he is shown at the top of a staircase, in the distance and completely in shadows. Why? Because this scene shows him bowing to his dark impulses. In this case, he is acting on his lust for attractive women and because this woman is dressed conservatively, he sends her away. When she comes back dressed in a sexually appealing way, he agrees to meet her. When Schindler does something good, his face is shown fully lighted. An example is when he gives a chocolate bar to Helen Hirsch when questioning her in the basement, to reveal his good will toward her.

Fascism is not really addressed in this film, because it focuses more on Oskar Schindler and his transformation from Nazi party-man to Jewish savior. Oddly enough, the same can be said about the role of Jewish people in the film. There are many opportunities for character development, but the only Jew that really gets any serious screen-time is Yitzchak Stern. The Jewish people in Schindler’s List are essentially part of the backdrop of the Holocaust and act as supporting players to tell Schindler’s story. Not to belittle Schindler’s efforts, but it is odd that a film dedicated to the memory of six million dead Jews gives them so little time to tell their own stories, or act in any meaningful way.

Despite any flaws the movie has, Schindler’s List is an important part of the film industry’s portrayal of the Holocaust. It is the top rated Holocaust movie according to IMDB.com and has and will expose more people to the Jewish tragedy of World War II than any history book is likely to do, as sad as that may be. The use of color and the portrayal of the characters is very effective in drawing in and holding the attention of the viewer, allowing them to experience the film without having to think too hard about it.