Another week done. On the one hand, I feel like I should value my time more, but on the other, I’m always so glad when another work week is finished. Sometimes we’re too worn out to do anything on the weekend and we spend most of our time at home, just relaxing. This weekend, we’d made plans to try to get out and enjoy some art. We had originally planned to go to the Guggenheim on Saturday night. I did a little research on their website and found out that if you go between 5:45 PM and 7:45 PM on a Saturday night, you can pay whatever you want for admission, instead of the usual $25 apiece. I don’t mind paying to see art, but I can’t see paying $50.00 (the Met has the same suggested rate for adults, though it’s just a suggested rate) every time we decide to spend an hour or two inside a museum. We’re not tourists, after all.

We never made it out of the house on Saturday afternoon, so when we got ready to go out on Sunday we went to the Metropolitan Museum of Art instead. We can go visit the Guggenheim next Saturday, if we’re not doing something else. Our plan was to go to the second floor and look at the 19th and early 20th century European paintings, but we got sidetracked when we stumbled into the “Manus x Machina” special exhibit behind the medieval European art section of the first floor. We were actually heading to the restrooms at the time. The exhibit wasn’t too big so we figured we’d take a look before heading upstairs. It was incredible how many people were in that small area. In a few places I felt like I was wading through the herds of people that are always moving through Times Square.

The dresses on display were way beyond what I was expecting. I didn’t think I would be impressed, because I’m not seriously into fashion, but looking at the dresses on display there, I think I finally understood that sometimes fashion can be art too, as cheesy as that sounds.

Some of the dresses were fascinating:

Some were terrifying (this one is made with real gull skulls): 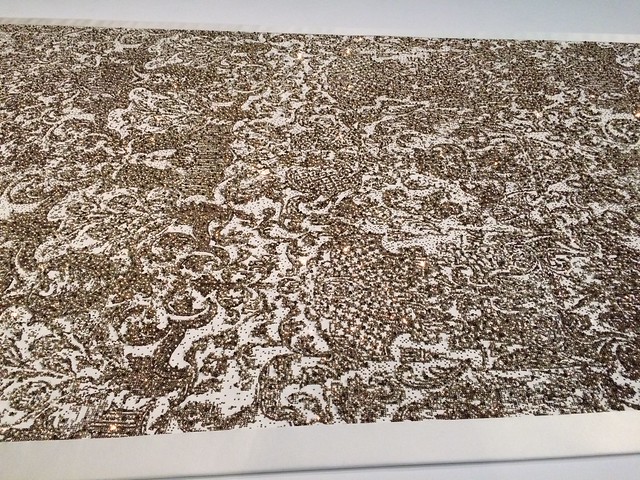 //embedr.flickr.com/assets/client-code.jsWe finally found our way upstairs, but immediately got lost in the 1600-1800s era galleries. It wasn’t until we were about to leave that we finally found ourselves looking at Van Gogh, Degas, and Gauguin. After having visited so many times, I got overconfident in my ability to navigate to the area we were looking for. Next time I’ll just download the app before we go so I have a map in my pocket.

I’d hoped to spend 20 minutes or so in the Arab Lands, Turkey, Iran, Central Asia and Later South Asia gallery, but I think I was being too ambitious considering how late it was when we got there, but there’s always next time.

We polished off the evening with some awesome burgers over at Shake Shack. It was a pretty good end to the weekend.

One thought on “An Afternoon at the Museum”