Last Saturday, I went over to the Metropolitan Museum of Art on 5th Avenue to conduct a scavenger hunt for certain types of items in this exhibit and then drafted up an essay response, but I thought it might be useful to people thinking about going to see the exhibit itself, so I’m posting it here as well.

The exhibit, “Jerusalem: 1000-1400 Every People Under Heaven,” is being shown at the Metropolitan Museum of Art from September 26, 2016 to January 8, 2017. Like the title of the exhibit implies, the selection of art being displayed includes pieces that are representative of Judaism, Christianity and Islam, the “People Under Heaven” in the Abrahamic tradition. 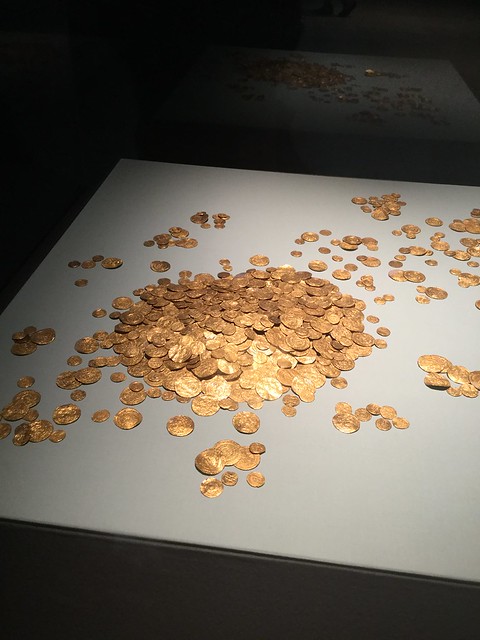 One of the displays contains a set of astrolabes, which, according to the description, were devices that were “used to answer questions related to time, geography, and the position of the stars.” The three astrolabes on display were all created in Andalusia and include the city of Jerusalem. The text on the astrolabes were written in Arabic, Judeo-Arabic, Hebrew and Latin. Another interesting item with text in multiple languages is “Slaughter of the Amalekites and Saul’s Last Stand,” which contains marginal notes in Latin, Persian and Judeo-Persian, written by subsequent owners of the book.

Most of the items were in pretty common languages used in the area, like those mentioned above, though there were exceptions. There is a text called “The Book of Kings” which I assume is written in an Ethiopian language, but I cannot be sure because the language used is not included in the description. More clearly labeled is a Copto-Arabic Book of Prayers, written in the Bohairic dialect of Coptic Egyptian. There is also a Book of Saints’ Lives written in what I can only assume is Georgian, again because the description is not clear.

There is a very large variety of items on display. There were at least three different versions of the Bible: a Samaritan Bible from 1232 CE in Yavneh, a Bible from northern Europe, ca. 1300, and a Bible from 13th century Rome or Bologna. There are also Jewish liturgical books like “Opening Prayer for Shabbat Parah” from 1257-58 CE, “The Catalan Mahzor” from 1280 CE, and “Next Year in Jerusalem,” a Haggadah from 1360-1370 CE. There were also choir books, swords, vases, amazing Jewish wedding rings, pillar capitals and reliquaries.

Two items that really caught my attention were the “A Knight of the d’Aluye Family” and the “’Umra Certificate.” The “Knight” sculpture was the covering of a burial place for a Crusader, dated to between 1248-1267 CE. What piqued my interest was the sword depicted in the sculpture, which is Chinese in appearance. It was fascinating to see actual proof of the exchange of items between Europe and Asia during that period. The ‘umra certificate from 1433 CE, which belonged to Sayyid Yusuf bin Sayyid Shihab al-Din Mawara al-Nahri, fascinated me because it emphasized just how important pilgrimage was and perhaps continues to be in the Islamic tradition. Going on the Hajj to Mecca had a direct impact on a Muslim’s social standing and warranted adding the honorific al-Hajj or al-Hajjah to one’s name. The ‘umra scroll shows that pilgrimage to areas in and around Jerusalem were nearly as important and warranted their being added to a certificate that could be displayed when the pilgrim returned home.

The exhibit at the Metropolitan Museum of Art is definitely worth attending. It shows the central importance that Jerusalem played to a huge range of areas between 1000 and 1400, with items on display from Africa, Europe, Persia, and various places in the Middle East. It would be nice if there were translations of the texts on display, or if the languages being shown were at least clearly labeled. The grouping of the items could have been somewhat clearer as well, either chronologically or thematically. On the other hand, the items were displayed in a way that made them easy to view and appreciate. It is definitely a worthwhile way to spend an hour or two on a Saturday afternoon.