On the weekends, there is a free water taxi that travels between Pier 11, Slip A, in Manhattan and piers at Fairways and IKEA in Red Hook, Brooklyn on a regular schedule. It also operates on weekdays but it’s not free. On weekdays, each ticket is $5, but if you keep your ticket receipt and make a purchase at IKEA they’ll deduct that $5, making the ride to the store essentially free.

These are some pictures from the ride there and back: 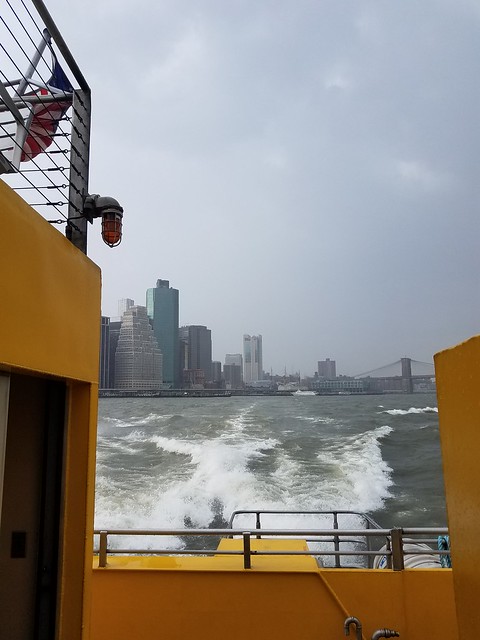 //embedr.flickr.com/assets/client-code.jsOn the way out, it started raining right as we boarded, but the boat traveled out from under the clouds and I took a few pictures. On the way back it was much nicer.The boat passes Governor’s Island and the Statue of Liberty is visible in the distance, though I wouldn’t recommend this ride as a good way to get a close, free view of that statue. You’re better off riding the Staten Island Ferry for that, which is also free and passes close to Ellis Island.

The boat passes Governor’s Island and the Statue of Liberty is visible in the distance. I don’t recommend riding this water taxi for a free view of the Statue of Liberty, though. It’s too far away. You’re better off riding the Staten Island Ferry for that, which is also free and passes close to Ellis Island. You just have to make sure you board near the front of the line and stand on the balcony on the correct side of the boat.

When we exited the boat at IKEA, a lot of families walked straight to the parking lot and got in their cars to leave. It looks like they used IKEA’s parking lot for free parking and the boat for a free ride into the city. It makes sense, from a money point of view. Parking isn’t cheap in NYC and the boat drops you off a short walk from Battery Park and quite a few museums.

I also noticed that when you’re leaving the IKEA pier, you pass an NYPD impound lot on the left. There are hundreds of vehicles there, including lots of motorcycles. The motorcycles weren’t covered and they were right by the ocean. I can’t imagine the salt water spray is very good for them.

Anyhow, the water taxi ride is a great way to have some free fun if you’re on your way to IKEA, Fairways, or just Brooklyn in general and you have the time. Or if the trains aren’t running between Lower Manhattan and Brooklyn on the weekend, which is almost every weekend.