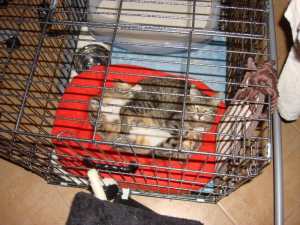 So, I’ve been living with my cats for about 5 months now. These are my first pair of cats as pets. It’s been quite a learning experience. They both have very different personalities, which was surprising to me. Dapper is outgoing, tries to be cute all the time, and wants attention. Bouncy would just as soon not do anything but lay around all the time. She gets mad and tries to run away more often than not when I want to pet her. When she does want to be petted she goes at it retard style. I’ll go more into that another time.

These cats are weird. Both of them. They seem spoiled and snobby. They even come off as arrogant sometimes. My wife says that Bouncy and Dapper are spoiled and out of control. She said her cats in the Philippines weren’t like this. I’ve done my best to train the two of them over the months but they still seem to do whatever they want to do, just when I’m not looking.

One thing I’ve been adamant about is that they not climb up into the windows. I know my mom’s cats like to lay on the windowsill in the sun sometimes. The windows we have don’t have sills though, and they don’t look out onto a balcony like my mom’s. These windows have a sort of grill over them that the cats like to climb, but outside the window is a 13 floor drop to hard pavement. The holes in the grill are big enough for them to climb through easily too. At one time I had hoped that we would be able to open the windows sometimes for fresh air, but I guess that’s not going to happen. The cats would run straight through them thinking there was something to jump onto on the other side. I’ve seen them try to run through the glass before. No amount of yelling or spanking has persuaded them to give up on the windows either.

Another issue has been my computer desk. I do not want them on it. I don’t want to run the risk of them knocking over my laptop or bluetooth keyboard or mouse. Not to mention the external hard drives I have set up. Dapper doesn’t really bother with my desk too much that I’ve seen, but from the start Bouncy has had a retard fascination with jumping up onto it. I say retard because I’ve really laid into her verbally and later physically to try to convince her that nothing can come of being on my desk but heartache and pain. It doesn’t register with her though. One time, I came home from being out and walked through the bedroom door just in time to see Bouncy finishing up a long pee on the notebook beside my laptop. I suppose she was determined to convince me that the desk was her territory, not mine. She had a very hard lesson that day and it wasn’t long after that I purchased a cage for them.

Now, whenever we go out, even if only briefly, they get put in the cage. I would have to say that the cage is probably the most worthwhile thing I’ve bought concerning them. Of course, they don’t like it much but it has provided me with a lot of peace of mind. Every so often I’ll leave them out when I go out, to test them and see if they’ll behave. Invariably they screw it up. I’ll come back to find things knocked over everywhere. Clothes will be pulled out of drawers onto floors, the curtains will be thrown around from them playing in the windows, and all other manner of disaster. So, the cage is still getting quite a bit of use.

Another thing that cage has been good for is getting a good night’s rest. When we first got these two, they would play all day and then at night they would want to sleep in the bed with us, usually on the pillows wrapped around our heads, or under the blankets by our feet. That was perfectly fine with me. Over time though they developed the habit of sleeping all day and then going nuts during the night when we are trying to sleep. They run into things, making lots of noise, and they’ll climb over us on the bed at full speed, scratching us and waking us up. Not to mention that me being asleep counts as one of those times when I’m not looking, so they go up on the desk and in the windows. I thought that putting them in the cage and forcing them to sleep at night would cause them to play during the day and then keep quiet during the night. That hasn’t worked though. They lay awake in the cage all night, doing nothing, then sleep all day and right about the time for bed, they go nuts and I have to catch them and put them up for the night.

I’ve slowly come to the realization that training these cats may be an impossible task. They will probably keep doing whatever they like, when they like, if they think they can get away with it. That really pisses me off when I think about it. They’re just cats. They should do what they’re told. That doesn’t seem to register with them though. So, when we’re out and about it’s the cage for them! Hopefully they’ll grow out of this. I’d hate to have to keep locking them up every time we leave and every night. There’s also the issue of having to leave them caged all day and all night too when I start working again. I don’t want to have to come home to a disaster area after a long day at work. If that’s what it comes to though, then these two will be jailbird cats for life!