Sometimes grief sits in the body, like you’re carrying all of the guilt of every lost moment and lost opportunity as weight that manifests as fatigue, a burden, a fog that sits on your mind like a tightening rag.

Losing Artuso recently had me thinking about Thumper’s ashes. Thumper was a big part of our lives. She was a part of us and now she’s gone. It has been almost two years and it’s still painful to think about how she’s no longer with us, though it isn’t as wrenching as it was when she first passed away.

For a long time, we couldn’t have her ashes set out because it was too painful, but now, with Artuso gone as well, it felt wrong to me to have Artuso’s ashes placed in a nice location while Thumper’s were still stored away, so I put her ashes on the shelf by my desk, near my plants. The area is sunny all day and she’s surrounded by life, which seems fitting to me since she brought so much life, joy, and happiness to us while she was alive.

It’s been a little over two weeks since Artuso passed away. Like Thumper before him, he passed away from cancer. He had tumors in his back-right leg that eventually broke the skin and were causing him a lot of pain. Except for his favorite Greenies treats, he stopped eating. Then he stopped using his hammock. When he started having trouble just walking, we knew it was time for him to move on.

We only had him for a year and a half, and I wonder if he already had this illness when we found him and that’s why he was abandoned in the street in Little Italy in the Bronx. The timeline seems about right. But I don’t suppose it matters whether he was thrown out because he died loved and in a good home.

Artuso was incredibly sweet and gentle. You could tell he appreciated every act of kindness and affection we gave him. Unlike some of our other cats, he always wanted to be right next to us just for the sake of being next to us. He didn’t have ulterior motives like trying to wake us up early for food. That’s a difference between street rescues and cats raised at home that I’ve noticed. Rescues tend to not take affection and comforts for granted.

Artuso was always fascinated with the bedroom, and he enjoyed spending hours on our bed bathing in the sunbeams coming through the windows. Because Artuso enjoyed being in the bedroom so much, I put his ashes on the dresser near the bedroom window. The sun shines on that dresser for a good part of the afternoon so I think he would appreciate being placed there.

Thank you for being a part of our lives, Artuso. I wish you’d been with us longer, but I’m glad we had a little time together to learn from and enjoy being with each other.

We were looking through old photos on my wife’s old laptop a few days ago and we found this poster that I made when we lived in Singapore.

10 years ago, I posted this missing cat poster around Pasir Ris in Singapore. We had been feeding this cat below an HDB there for a few months and, one day, she suddenly went missing. We did eventually find her. One day, she just showed back up under the building.

I still wonder what she was doing during the week or so that she was missing. We were in contact with other people in the area that were caring for her and we knew she had already been spayed, so it wasn’t that.

Maybe she was exploring? Or had a bad encounter and was hiding out?

I like to think that someone else had decided to adopt her but then saw that other people were concerned for her and let her back out. It’s nice to think that there are a lot of people who care about animal welfare.

Anyway, this cat isn’t really “Mini” anymore. She’s about 11 now and she lives in Manhattan, New York City, with my Mom. We brought her with us when we moved.

I guess she’s pretty spoiled now. She eats shrimp, steak, and other table scraps in addition to her regular food. She has an apartment and a balcony to herself as well. No other cats to compete with.

Marble, living the big life in the city.

About a month ago, my wife suddenly ran out the door and then after a few minutes she came back in carrying two kittens. They were tiny. They looked like they couldn’t be more than about 4 weeks old, if that. Someone had dumped them in an abandoned lot and my wife had agreed to foster them.

So I was thinking, oh great. More cats. I like cats, but we had four already. I figured they were small though, so what difference does it make if they’re around for a while? Turns out, trying to get kittens that young to survive is more difficult than I realized. They had to be fed every 5 hours or so and their stomachs weren’t used to solid food so they were having diarrhea for about two weeks.

Since my wife brought them in without asking, she didn’t overly burden me with cleaning up after them. I just had to deal with the terrible smell. I think she had this idea that if she got them and took good care of them, they would love her and hang on her the way the other cats hang on me. Unfortunately, both kittens have taken a liking to me, are constantly climbing up on the chair to sit with me, and are starting to try to sleep next to me in the bed now that they’re figuring out how to climb.

It doesn’t seem like it’s been that long, but they’ve been here for a month and a half now. They’re about twice the size they were when they arrived. I’m pretty sure we’re keeping the black one. We’ve been wanting another black cat anyway, since our black cat Thumper passed away last August, but he’s a lot different from her. And I guess it’s not really fair to her or him to think he can take her place. She was really something special.

As for the gray one, I don’t know. She’s still here. She was supposed to be adopted out but she gets on really well with her brother and it seems like it would be a shame to separate them. But I’m just not sure and my wife keeps asking me and I keep saying I don’t know, and she thinks I’ll still be saying that in a few years. She’s probably right.

Anyway, I tried to take them down to visit my Mom before they get too big. That trip ended in disaster. They started freaking out almost immediately and when I was almost in Manhattan, they threw up in the carrier, so I had to turn around and come back. I wonder if maybe they were experiencing flashbacks from when they were abandoned and it was traumatizing them? When we got back, the gray one passed out and the black one hid under the bed for a few hours. I’ll try to get them downtown again later this week.

I keep calling them black and gray because we haven’t really committed to names for them. We have a few names that were throwing around for them, but nothing definite yet.

It has taken me a while to post this because it is such a hard thing to do. It was hard to look at her photos. Hard to think about all the good times we had together, and hard to deal with the fact that she’s no longer with us. It’s hard to type this because a public acknowledgment is so final.

We adopted Thumper in early 2009 in Singapore. Just over a year ago, Thumper was diagnosed with cancer. Saturday she lost her fight. The cancer had spread to her chest cavity and it was filling with fluid. She could no longer breathe well enough to move even two feet without collapsing and gasping for air. Watching her struggle and suffer and slowly die in front of us was incredibly painful and it was unfair to her to let her slowly suffocate to death.

On Saturday we took her to the vet to say goodbye. It was the hardest thing I’ve ever had to do. Making the choice and then physically doing it. Putting her in her carrier and walking out of our apartment on Saturday morning was a really bad experience. Holding her head while she took her last breath is something I’ll never forget. I’d honestly rather go back to Iraq in 2003. It was less painful and less stressful.

Thumper was a blessing on our lives and helped us both through some tough times and became the spark of joy that lit up our home. The apartment feels empty without her. The last few days have been very tough for us and for Dapper, Thumper’s sister. Dapper has known Thumper since Thumper was a kitten also. Only her nemesis, Cheesecake, seems pretty good about things since he’s 2nd favorite instead of 3rd favorite now. But seriously, he’s acting weird too. They both look for her. Sometimes we do too.

RIP Thumper. You will be missed. Thank you.

Above: Dapper, in her “deep dish cuddler” bed. 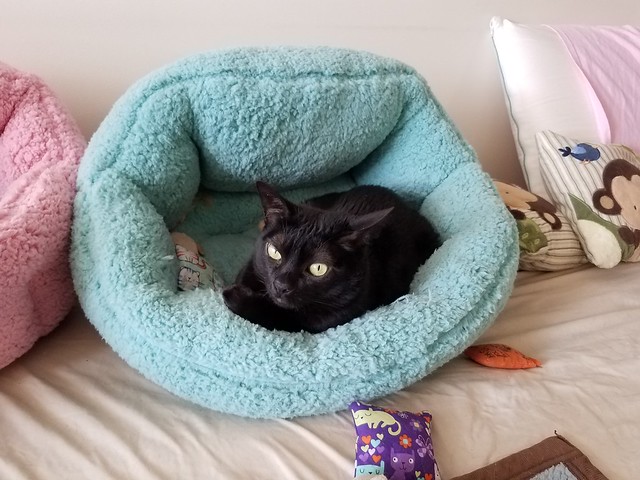 They’re all great cats, even Cheesecake, with his constant booger nose. I really need to figure out what’s wrong with him. 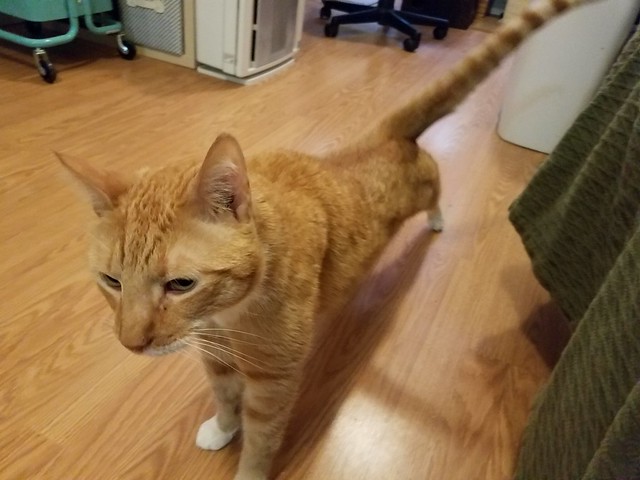 We found this guy in an alley in the middle of last winter. He’s still kind of sick but the improvement in his health has been amazing.

Now, if we could just get him to stop eating like he’s still starving in the street, that would be awesome!

Cheesecake didn’t win this round!

I bought this book a while ago, but I’m just getting started with it now. I saw a Japanese movie adaptation a few years ago and I’ve been wanting to read the original story.