My wife really really loves cats. She loves all sorts of pets, but she has a particular weakness for cats.  From what I can tell, she always had cats of her own when she lived in the Philippines and now we have cats in Singapore.

I know where my wife got her love of cats from now: her dad. On my last few trips to the Philippines we didn’t have the time to go to Pampanga to visit her parents at their apartment. We only saw her family’s house in Antipolo, in Rizal province. That’s not to say they don’t have pets there, because they do. There are quite a few cats running around and there are even two dogs as well. That’s different though, because the cats all belong to different members of her family. It doesn’t seem unusual for a person to have one or two cats.

The first animals you’ll notice are the three dogs in the yard. One of them is named Happy (the brownish one) and one of the others is named Mayumi (one of the white ones). I can’t recall the name of the other white dog, and I couldn’t tell them apart anyways. Once you get past the dogs and into the apartments you’ll find cats everywhere.

The apartments don’t have air conditioning, so the windows are open all the time. Surprisingly, they’re not screened in either. This is going a bit off topic, but I never understood why window screens aren’t in common usage in Singapore or the Philippines. With high levels of mosquito borne illnesses, like dengue for example, which can be fatal, you’d think window screens would be in high demand. That doesn’t appear to be the case though. Anyways, like I was saying, the windows are always open and they aren’t screened so the cats go in and out at their leisure. They seem to get along well enough with the dogs too, so you might see the cats hanging out in the yard. There must have been about 11 cats and kittens running around. I only took pictures of a few of them. 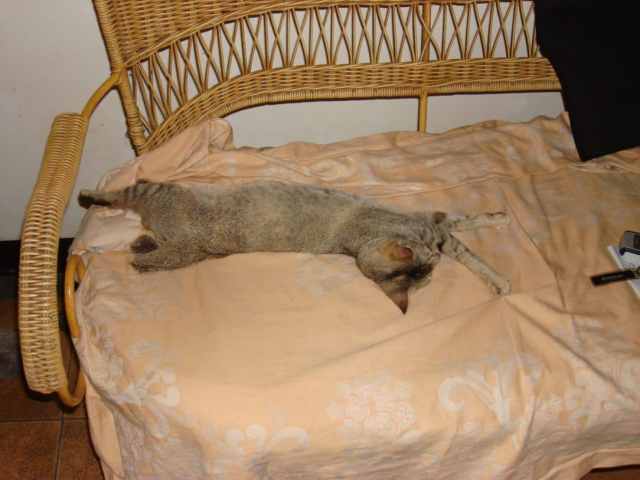 One cat in particular caught my attention. Her name is Samsung. She’s incredibly friendly and purrs so hard she nearly chokes herself when you put her on your lap and pet her. What’s especially strange about this cat, though, is that when you pet her, she crawls up towards your shoulder, starts kneading against you, and then starts licking/sucking/slobbering on your shirt. My father-in-law says it’s because he found her when she was really young and she never had the chance to do much nursing. When he took her in, he kept her wrapped up in blankets and she would try to nurse on the blankets when she was hungry. Apparently she never lost the habit. Great cat, but you can’t hold her when you’re wearing a nice, clean shirt that you want to go out in, or you’ll wind up having spots of cat drool on yourself.

Another interesting cat is named Jumong. I called her Captain Hook because she only has one eye. According to my father-in-law, some kid in the neighborhood shot out her other eye with a pellet gun. 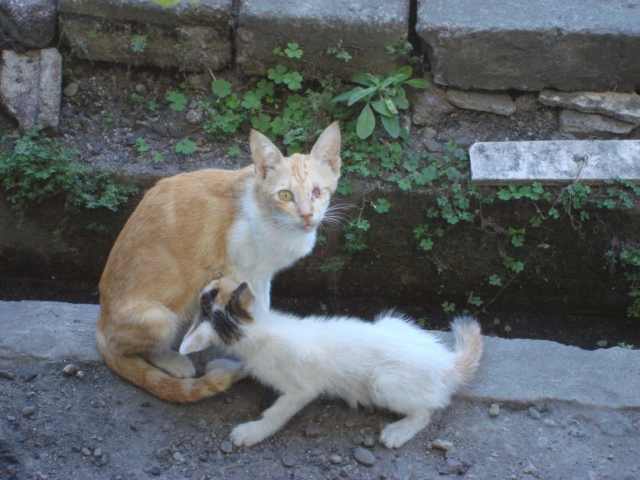