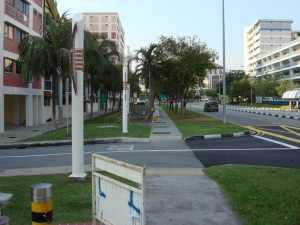 About a year ago when I first moved here I saw some advertisements about an initiative that the Tampines Town Council was starting that would allow bicyclists to share the sidewalk with pedestrians.

To the point of being a cliche, it’s common knowledge that in Asia, bicycles are used as a major form of transportation, regardless of income level, since it’s fast, convenient, doesn’t require gas, and you can get to places on your bicycle that you can’t get to in your car.  For example, you could ride up to the convenience store and park right outside it, rather than try to find a parking lot and walk to the convenience store.  Singapore is designed in a way that it looks like Atlanta, but has roads and parking areas like a big city.  Often you’ll find areas with no parking lots, meaning you have to drive quite a ways from your intended destination to find a parking garage and then walk the rest of the way.  In my mind that defeats the purpose.

The legalization of riding bicycles on sidewalks has been widely adopted in Singapore, so the test run must have met with positive results.  I think it’s a fantastic idea.  When I was younger and lived in New York City for a while, my mom told me that it was actually illegal to ride bicycles on the sidewalk there.  I was shocked then and I’m still shocked now.  I can’t imagine riding a bicycle in the city streets in New York.  The traffic isn’t as bad here, but still, who wants to share a lane with a double-decker bus or a semi-truck?

To further improve the city for bicycle use, many areas have had bike paths built alongside the sidewalks.  This makes it possible for cyclists to travel faster, since they have a dedicated lane just for them.  It also makes pedestrians feel safer, since they don’t have to constantly peer over their shoulder for oncoming bicycles.  Bicycles are supposed to all have bells on them, and riders are supposed to use them to alert pedestrians that they’re coming but it doesn’t always happen.

So, here’s where the problem comes in. The city has legalized the use of bicycles on sidewalks, and even made special paths for them, but people don’t seem to want to use them. What I mean is, even though there’s a bike path that parallels the sidewalk, riders often use the pedestrian sidewalk anyways. To make it worse they often don’t use their bells and then get angry when pedestrians don’t move out of their way. On one occasion a rider almost hit my wife with a bicycle, in the area seen in the picture above. I chewed him out and told him he had no right to be on the pedestrian sidewalk anyways, and asked him if he was blind, since the bicycle path is clearly right next to the sidewalk and is marked with big yellow bicycle symbols. On the other hand, I often see pedestrians walking on the bicycle paths. I also see cyclists still riding in the streets, disrupting traffic.

It seems like it would be obvious to people that they should use the appropriate areas for walking and riding, but it just doesn’t happen that way.  Is it a case of “I’m always right” or simply laziness?

One thought on “Sharing Sidewalks”