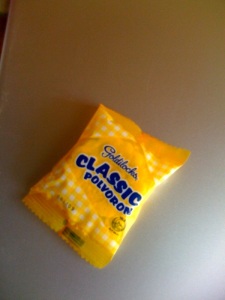 Goldilocks is a pretty well known bakery in the Philippines.  You can find outlets all over the place there and the things they sell are really tasty.  The first time I was in the Philippines over a year ago I noticed the place and we wound up buying some cakes to try them out.  Well, my wife already knew they were good.  She just wanted to share the joy I guess.

The cakes were very good, and I’m looking forward to the next time I’ll be able to get something from them.  There are bakeries all over Singapore but the things that are produced here aren’t quite as “Westernized” as what I’d like.  Generally they’re more bland and it’s nearly impossible to find fruit filled pastries.

The snack pictured at left is called ‘polvoron’.  I’d never heard of it before, and found the following information about it when I looked it up (source):

Polvoron is powdered milk candy, made of flour, sugar butter and powdered milk. The flour is toasted, all the ingredients are mixed and shaped into round or oval-shaped molds. It is believe that making polvoron started during the American occupation to use up the huge amount of powdered milk brought in by the Americans. Polvoron over the years has become one of the most loved sweet Filipino delicacy.

It has a sweet taste to it, but it’s mild.  It’s not something that will make your teeth feel like they’re rotting out of your head with every bite.  Also, it’s dry and has a tendency to stick to the teeth and gums, so it’s best to have a drink handy while eating this.