One of the things I’ve been unable to do since moving to Singapore is locate a great pizza. I mean a great pizza that tastes like a slice of pizza I could get in New York City. I know that’s not likely to happen, but man, I was hoping for something close at least.

There are Pizza Hut franchises here, but they’re just not the same. They use a different type of tomato sauce and they use a lot of weird ingredients that you’d never find on the menu in the US. I never liked Pizza hut anyway, since it’s so greasy. The last time I ate at a pizza hut was in Alabama and I literally used a napkin to sponge the grease off of it before I ate it.

In the US, my preferred pizza, as far as franchises go, is Papa John’s. That stuff is just plain good!

Here in Singapore, I’d take just about anything.

There’s a Sbarro’s in the Philippines that I ate at. It was great! There’s another restaurant there that looks good too, an Italian place, but I just can’t remember the name of it. I haven’t been able to try it yet, but hopefully the next time I’m there I will. I have a craving for Mexican food too, so hopefully we’ll get to stop by Mexicali. Not sure when that’ll be though, since my next trips are lined up for Phuket and maybe Bali or Sabah.

But… my quest for great pizza in Singapore is still incomplete. I thought I might have found a winner at a restaurant called ‘New York, New York’, but it wasn’t quite up to par either.

To start off with, the pizza was really greasy. You can see that in the photo. The second problem is that the sauce was put on so lightly they might as well have just excluded it from the recipe, and what sauce was on there wasn’t very tasty. I guess they missed the whole part about pizza sauce having spices and being more than just tomato sauce.

The worst part is that we had to pay 13 SGD for this disaster and it was only 9 inches in diameter.

Oh, and speaking of ‘diameter’, our waiter didn’t understand what the word meant. He got so confused that he wound up telling me that they only sold pizza by the slice and that the slice was 9 inches long, and cost 13 SGD. I told him to go get a manager and the manager was able to clarify for me. Plus, I just wanted to point out to him that his waiter should at least know what’s on the menu.

The closest I’ve seen so far is that ‘Canada Pizza’, I think it’s called, but it wasn’t good enough to make me want more.

On a positive note, I heard from another person’s blog (An American Girl in Singapore) that there’s a Dunkin Donuts in the new Ion Mall down on Orchard. That’s GREAT news. The donuts at most shops here in Singapore are just… too much I guess you could say. They’re overdone with icing and overdone with fillings and way too sweet to the point they’re not even good anymore. Some of them are so bad you might as well just be eating a big ball of sugar. The mom and pop bakeries here, on the other hand, don’t put enough and you wind up feeling like you’re just eating plain dough. Dunkin Donuts is a franchise though. They should get it right, because it’s a standard recipe. I can’t wait to get down there and check to see if they have Bavarian Cream! 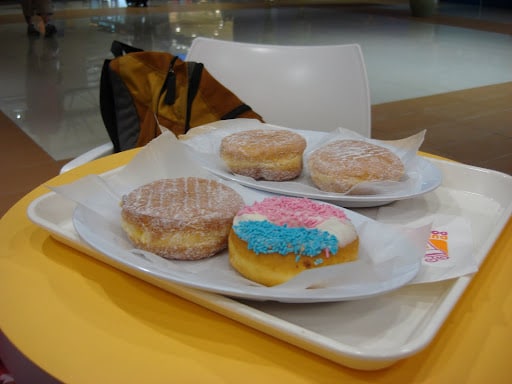 (A photo of the last Dunkin Donuts we had in Kuala Lumpur’s airport a few months ago)
If you enjoy reading articles about pizza, you might enjoy THIS great article about a Singaporean’s search for good pizza in Italy. It’s quite enjoyable and funny!

11 thoughts on “The Search For Great Pizza in Singapore Continues”