Ya, ya, that’s a fun song right?  And, much to my wife’s great displeasure, it’s true more often than not.

Well, it’s not often I have decent beans here in Singapore.  I’ve started to become accustomed to eating more Asian dishes.  I still miss Western food though, so when I saw a bag of Hambeen’s 15 Bean soup mix at Cold Storage at Tampines 1, I was quick to grab it up and drop it into my basket.  I hadn’t actually had that soup since 2001, so it’d been about 8 years, but I remembered how good it was and was excited to try it again. 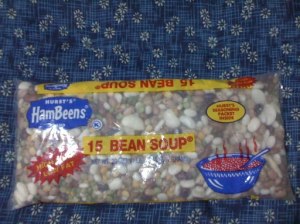 Looks interesting right?  The bowl picture on the bottom right looks a little weird, but this stuff is actually good.  I promise. 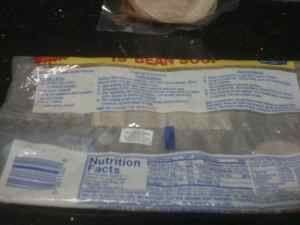 Here on the back of the packaging is the recipe.  You can either do the quick cooking, or you can pre-soak the beans.  We wound up mixing the directions a bit and doing it our own way. 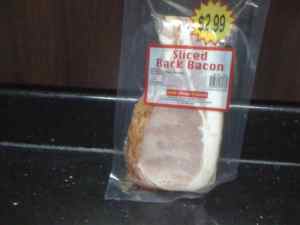 The recipe calls for smoked sausage, but we couldn’t find any of that so we substituted this sliced back bacon and it worked out fairly well.  We probably could’ve used twice as much and it would have been a bit better, but it was still good anyway.

The other ingredients on this were: juice of 1 lemon, 1 15 oz can of diced or stewed tomato, 2 table spoons of minced garlic, 1 cup of chopped onion, and 1 table spoon of chili powder.  We cut up two red chilis and added that in as well.  It could’ve used a bit more.  I think when I made this the last time I put jalapeno peppers in it, but those aren’t too common here.

What you’re supposed to do is soak the beans overnight, or for at least 8 hours.  Then you dump them in a pot with fresh water: 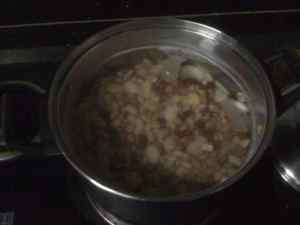 After that you bring it to a quick bowl and simmer for an hour.  In the meantime you can get everything else ready by doing your chopping and whatnot. 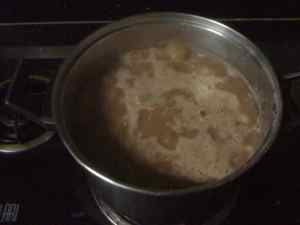 When simmering, this stuff looks like a witches brew.  Oh, and when I was first boiling it there was some white froth on top that I had to skim off.  I honestly have no clue what that was all about but hey, everything turned out ok!

Well, once an hour has passed and you get everything ready you dump it all in the pot and let it simmer for, depending on whether you’re doing the fast or short cooking instructions, 2.5 hours, or 45 minutes.  Then, 1 to 2 minutes before you’re done you empty the spice packet that comes with the beans into the pot.

This is where we sort of varied from the instructions a bit.  We did let it boil and simmer for an hour, and then we dumped everything in, but after that we just turned up the heat about and let it go for another 30 minutes.  Honestly, we should’ve left it going for that extra 30 minutes, because some of the beans were still a bit firmer than they should have been, but it didn’t matter.  The stuff was good, and it helped us with leftovers not tasting overcooked when reheated. 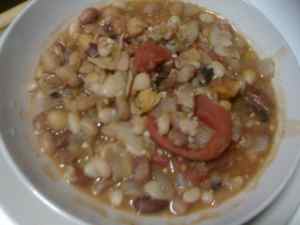 So, this was the finished product.  It cooks down pretty thick, and that’s how it’s supposed to be.  My wife is used to watery soups, because that’s just how it normally is here in Asia, but this felt like home to me.  It goes great over rice and it’s good by itself too.

That little bag made 14 to 16 servings.  Nearly everyone had at least one bowl and then we had leftovers for 4 days!  Ya… a stinky four days!  Ha ha ha!

One thought on “Beans, Beans, The Musical Fruit”