There are some things that you just somehow expect to be commonplace, regardless of where you go in the world, one of which is showers.  Well, that’s how it was for me anyway.  I’ve spent my whole life, up until I came to Singapore, believing that all showers were created equal.  What I mean is that the shower or shower / tub combo are definitively separated from the rest of the bathroom, so that the water stays in the shower area and the rest of the bathroom stays dry.  The water drain is located in the bottom of the shower or in the tub and the water doesn’t flow across the floor.

Water and drains on the floor?  Wondering what I’m talking about?  Check this out:

This is a bathroom in Singapore.  As you can see, there’s no real distinction between the shower area and the rest of the bathroom, other than a slight depression in the floor.  There wasn’t even a shower curtain in this one.  Now that I think about it, two of the three places I’ve stayed in Singapore haven’t had shower curtains or curtain rods.  The hose on the wall in this picture goes up to a wall mounted (or optionally hand held) shower head.

The downside to this is that whenever you take a shower, the whole bathroom generally gets wet from spraying water.  The drains for the water are set into the floor, but oftentimes, for no apparent reason, the drains are on the opposite side of the bathroom from where the shower is.  Also, the buildings have sometimes settled and are no longer level, so the water winds up pooling before it runs to the drain.

On top of that, spraying your butt with water rather than using toilet paper is a common practice in Singapore from what I’ve seen, which leads to this sort of problem: 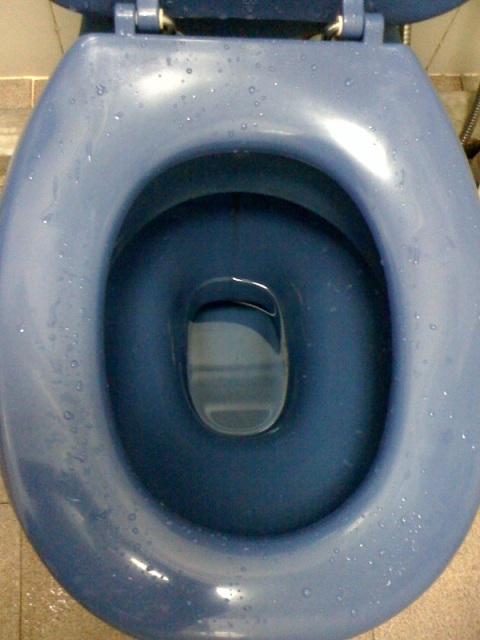 Every time you go to the bathroom and you want to sit on the seat you have to wipe it down.  Honestly I should be wiping it down with a disinfectant each time too, because that’s not just water.  That’s someone else’s butt water.

You expect to miss things when you move abroad, but a dry bathroom and toilet seat just weren’t on my list of things I thought I would be missing.

8 thoughts on “Asian Shower Design (Much Different From American)”