The first time my wife and I walked around Patong looking for a place to eat we happened on a nice restaurant on a side street.  There’ll be more on that later, but when we were seated we looked around and realized that we were surrounded by cats.  It was kind of funny that the first place we would eat would be owned by a cat lover, given my wife’s love of cats. 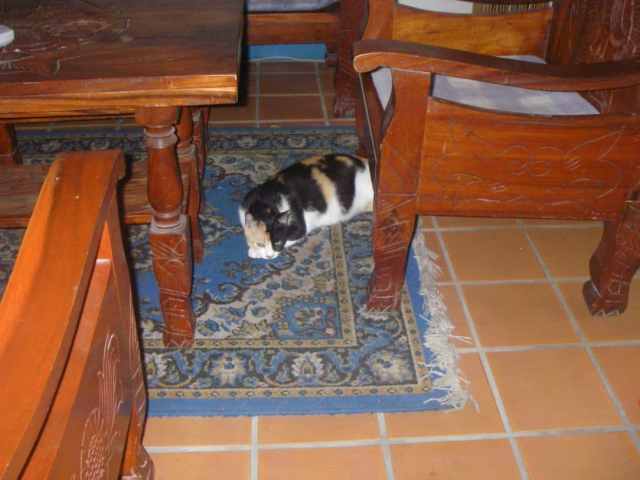 Ya, the cat in the last photo hopped up onto our table and had a look around.  She seemed particularly interested in the plastic bag we had carried bottled drinks around in.  The cat was very friendly so I didn’t shoo it away until it was almost time for our food to arrive.

After seeing all of those cats we kept our eyes peeled and we saw quite few more pets and strays in the area.  Strangely, I never saw another cat.  I don’t want to make any guesses as to why that might be, but there were plenty of dogs around.  It seems like dogs are much more popular in Patong and you can see them alone or in groups roaming the streets. 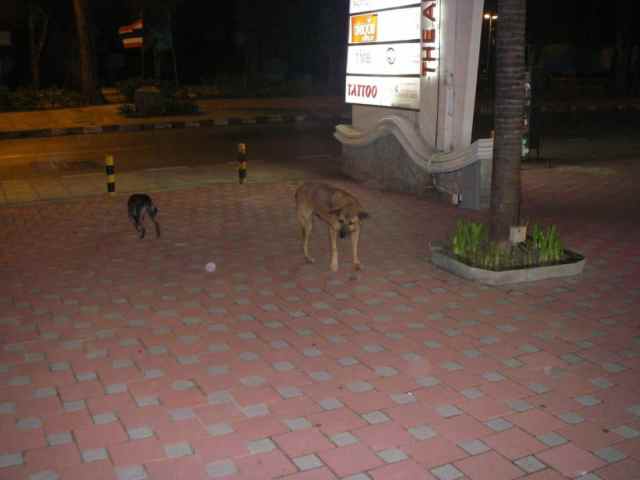 I can’t say they were the cleanest looking animals, but not a one of them was in danger of starving.  We saw places where food was put out for them and, like the guy in the last photo shows, they were given attention not just from tourists with cameras, but by locals as well.  Not a one of them ever so much as growled at us, even as we stepped around or over them, or dashed across the road behind them.

More than anything, these dogs (and the cats from the restaurant) added flavor and liveliness to the scenery of Patong and were sometimes even a cause for a good laugh, like with the first dog pictured.  His balls are huge!

Not all of the dogs we saw were strays, though.  There was a booth with a girl who had her dog sitting on the counter.  I don’t remember what she was trying to sell, because I wasn’t interested.  I just stopped to look at her dog.  It was friendly, and I guess very obedient.  It wasn’t leashed.  It could’ve hopped down and ran off, but it was perfectly content to just sit there and watch the tourists.

I kinda want one for myself now.  Maybe in a few years!