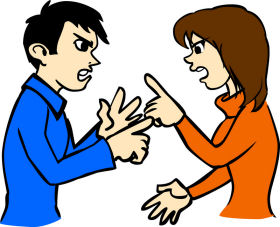 Today while we were standing in line waiting for a taxi at Tampines Mall, we saw a guy make a complete fool out of himself.  We were having a conversation about cat toys when I heard a guy yell something at the top of his lungs.  He sounded angry.  When he yelled a second time people started turning to look.  I’m not sure what he was saying.  It sounded like ‘ha’, ‘hwa’, or maybe ‘huwa’.  He was speaking half in Chinese and half in English.

When I turned to look I saw a woman sitting in one of the McDonald’s chairs with a guy standing above her, speaking angrily.  He kept yelling at her and then she got up out of the chair and stood in line.  Most people started minding their own business again but I kept watching until they got in line.  You don’t see people go nuts like that in public here very often, so it really did make my evening.  Probably wasn’t so fun for her though.

After that things sort of settled down but I could still hear them bickering behind me.  I could hear him asking her, “What’s wrong with you?  Why won’t you…”  Then I heard her reply, “I just want to go home.”  Then he started telling her she should just walk.  I’m just guessing that the girl was tired and wanted to take the cab, and the guy wanted to walk home.

After a few minutes (the line was really long) the guy got loud again and I turned to see what was going on.  He was gripping her arm and wrist and dragged her out of the line.  He was telling her, “Come on!  Just come on!  Will you come on!?”  She kept trying to pull away from him but he dragged her out of the line and forward a few feet until they were standing even with my wife and I.  She started complaining that he was hurting her by gripping her so tightly and I believe her.  His knuckles and fingers were white from gripping down on her arm.  Despite her protests that he was physically hurting her, he dragged her past the taxi queueing area towards the street, presumably to walk home instead of take the cab.

I was entertained by the whole event, but in a sick, witnessing-a-car-accident kind of way.  I see nothing but trouble for those two.  She may have even gotten beaten up tonight for all I know.  I thought about helping, for a brief moment.  This isn’t my country though, so I’m not about to stick my neck out and risk legal proceedings for someone I don’t even know.  Not here.

So, did it cross the line?  Should someone have done something to stop him?  Was it no one else’s business?  And what if something ‘happens’ to her tonight?

At least one thing’s for certain, that guy made himself look like a complete douche.