These photos are from a celebration of Hungry Ghost Month. Hungry Ghost Month is celebrated on the seventh month of the Chinese lunar calendar and is a tradition that originated in China. During the Communist Cultural Revolution (around 1966 I believe) it was stamped out there, but the tradition is still practiced in Singapore, Hong Kong and Taiwan.

There’s a lot of superstition surrounding the event and people avoid moving to a new house, don’t get married during that time, and won’t travel unless they have to. During Hungry Ghost Month, it’s believed that the Gates of Hell are opened and the spirits of the dead walk the earth, looking for offerings from descendants and potentially making victims of the unwary.

In an effort to appease these ghosts, offerings of food are made. Also, paper effigies of money, little houses and even maids (human sacrifice?) are burned to assist the dead in the afterlife. This is also a time when people will set up parties, like you’ll see in the pictures below. I suppose the parties are to celebrate life and to remember ancestors. At these parties, though, there will be one table that’s set but left empty. That table is set for the dead.

Oddly enough, Hungry Ghost Month is a time when a lot of people feel that they’ll find lucky numbers for the lottery. Some people will even go to graveyards with talismans and offerings, asking the dead to provide them with lucky numbers.
I happened on this event when it was still being set up and asked a few questions about what was going on. I only got a general idea, since the person’s English wasn’t very good, but it seems like they were going to have an auction. There were also buckets with prizes of food. I’m not sure where the proceeds went, but there was an attendance fee for the function. I believe it was 70 dollars, and it was open to members of a certain group. This was a few months ago so I’m fuzzy on the details.

I kinda saved this for October though, because to me it felt like the Singapore version of Halloween. Well, they’re not really the same, except that they deal with ghosts, scary stuff and superstitions. It seems fitting though, especially with the whole Gates of Hell thing.

Also, I thought it was interesting how the ceremonies honor the dead. In popular media, you get the impression that it’s something that only goes on in Japan.

Offerings for the dead perhaps? 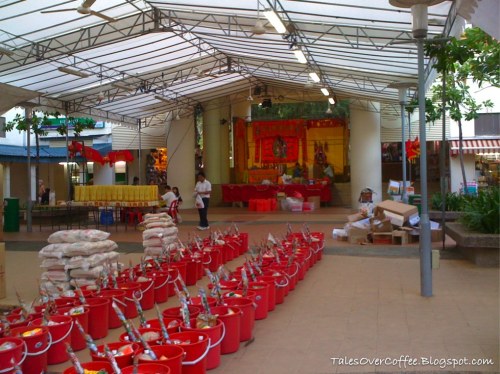 A picture taken later, when the event was in full swing.