My wife and I were walking down 116th Street this past Saturday on our way towards Target and ALDI. Between 3rd and 2nd Avenues we noticed a group of people painting a mural on a wall, so we crossed to take a better look. 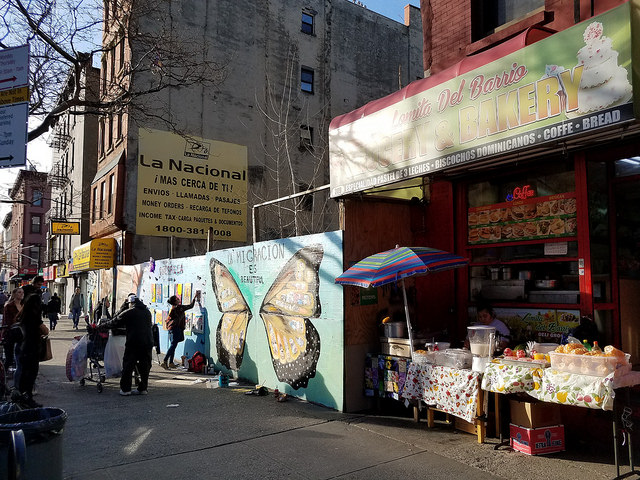 The mural primarily addresses U.S. immigration policy and seems to be an expression of the idea that “we are all immigrants.” One of the installations under the “Galerie De Guerrilla Gallery” section of the mural is a mirror with the word “Immigrant” in English under it. Another section of the mural shows a set of butterfly wings with the caption “La Migracion Es Beautiful” (Immigration is Beautiful). The point seems to be to remind English speakers that they are also immigrants while reminding immigrants that they are beautiful parts of a local immigrant society. 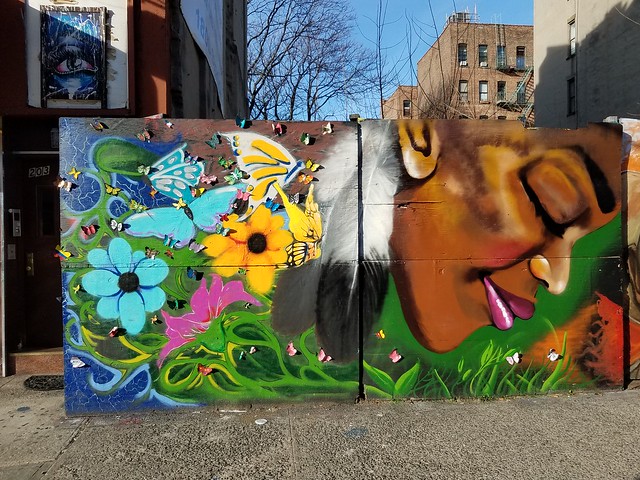 Maybe the mural isn’t about how we’re all immigrants, though. The butterfly wings contain pictures of a wide range of people, but almost exclusively depict Hispanics and African Americans, interspersed with what appears to be a few South Asian Muslims and Native Americans. One of the larger panels shows a Native American woman lying down by a river with teepees in the background next to a quote from an Ogala Lakota Native American. A section of the mural shows the face of an African American woman wearing an Indian feather in her hair.

It seems odd to include Native Americans and African Americans in a mural about how we are all immigrants. The Native Americans were the first people on the land. You can’t immigrate into a place that doesn’t have people in it before you arrive. And, unlike Ben Carson, I would hardly consider the enslavement and forced migration of Africans to be an act of immigration.

Maybe my first impression was wrong. Maybe the message isn’t about inclusivity but is rather about a unified confrontation between minority groups and those viewed as Caucasian. If that’s the case, the mural is eye-catching but is a missed opportunity for emphasizing shared belonging in the national community. Or maybe I’m just over-thinking the artists’ use of the word “immigrant.” Maybe the message of the mural is just protesting in general all of the morally reprehensible things that Trump (and the Republican party) has said and done without explicitly naming him. That would explain the quote by the Lakota Native American about the destruction of the environment. That, along with the slogan “El agua es vida” (Water is life) would be a reference to Standing Rock and DAPL. The inclusion of African Americans would be a reference perhaps to Trump calling for the death penalty for the wrongly accused Central Park Five. The inclusion of Hispanics and Muslims would be a reference to Trump’s constant vitriolic rhetoric and jingoism about Mexicans and Executive Orders that target Muslims.

Either way, immigration is a beautiful thing. Beyond the economic necessity of continued immigration, the diversity that immigrants bring to American life is what makes this country an amazing place to live, at least in major cities and on the coasts. I believe that intellectual and spiritual progress (and lofty goals like world peace) are dependent on having our comfort zones challenged. Encountering and understanding people from other parts of the world forces us to reevaluate and adjust our ideas and beliefs, both about others and about ourselves. I think that only happens when you’re forced to personally confront difference, in person. A book can only explain so much and never requires you to actually self-examine and defend your point of view. I also don’t see anything intrinsically worthwhile in resisting change or trying to hold onto an idealized vision of America that never existed in the first place.