Of all the museums I’ve visited in New York City, the New York Transit Museum was the most fun, even though it’s also (so far) the smallest. The museum is designed in a way that allows for interaction with many of the exhibits. There was a whole class of children on a field trip playing with the turnstiles when I first got there. I think the museum staff was aiming for making the place a popular field-trip destination. Besides all of the interactive exhibits, there is also a cafeteria/classroom area.Just because it was set up for kids doesn’t mean it can’t be fun for adults too, though.

Just because it was set up for kids doesn’t mean it can’t be fun for adults too, though. On the first floor or first basement level, depending on how you look at it, there are old buses or portions of buses that you can walk into and sit in. The driver’s seats are accessible and you can have a friend take your photo through the windshield. The newer buses are definitely designed better. The driver’s seat and the angle of the pedals were much more comfortable than an older model I tried out, which required me to keep my leg elevated all the time to press the pedals. I have no idea how people actually drove those older buses all day. Their right legs must have been twice the size of their left legs.

The bottom floor of the basement is where all of the old train cars are. They had everything from A trains, supposedly mid-90s to 2010 (some of which I still see on the A line, not sure why it’s in the museum), to trains from the early 1900s. A lot of the train cars looked similar inside. Even some of the same advertisements spanned decades. It was interesting to see how the seat configurations changed over time. I also thought it was interesting to see ceiling or rotating fans in some of the older train cars. Once a year, New York City runs some of these older trains on the 7 line (I think).

What really interested me, though, were the old advertisements. I’d like to go back and just spend a few hours studying them. You can tell a lot about people during a certain time period based on the products they were buying and how the appeals made by advertisers were framed. It’s also just neat to see the artwork styles.

Another awesome exhibit in the museum is of signs meant to regulate the behavior of passengers. The signs are from multiple transit systems around the world. Some of them are hilarious; all of them are necessary. Or at least, the ones for the New York transit system are necessary. I remember being shocked by how clean the trains and buses in Singapore were when I first moved there. The trains were so clean that sometimes people would sit on the floor, something that is totally out of the question in New York City trains. The buses in New York City are usually just as filthy as the trains. People litter everywhere here; they spit everywhere here. It’s a shame. The city would be so much nicer if people would take care of it, but they don’t. They just complain about how dirty the city is while contributing to the problem.

Anyhow, the New York Transit Museum is pretty awesome and I’ll definitely be going back at least one more time in the future. Take a look through the photo gallery below for more images of exhibits in the museum: 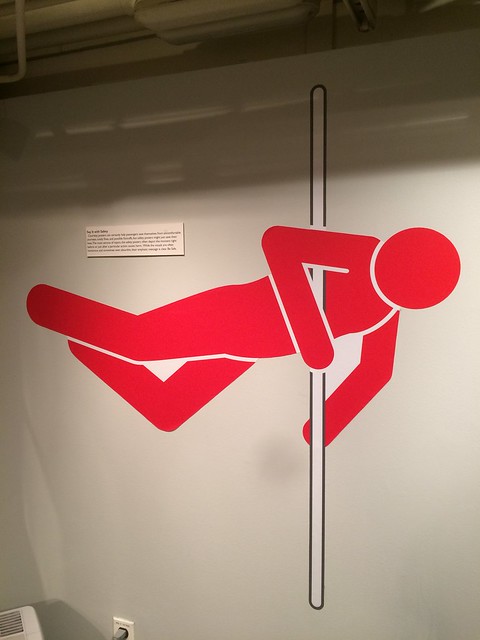 On the 6th of this month, my wife and I met up with friends of ours to check out an exhibit on children’s books at the New York Public Library on Fifth Avenue. I love going to that library! Right now, it’s just a reference library, meaning you can’t check any books out to take home, though there’s a chance that could change soon. There are plans being made to move a lot of the reference works to a storage facility in New Jersey and open up the area that is now called “the stacks” to the public as an area with books that can be taken home, though these plans are meeting heavy opposition from scholars who have filed lawsuits to block the removal of reference materials from the site.

The Fifth Avenue library branch regularly shows exhibits with different themes. Last year, we went to see an exhibit on old Automat restaurants.  I think you’d call them restaurants anyway. The exhibit we saw this time was on children’s books.

I wasn’t expecting much, but I was surprised by how well the exhibit was set up and the diversity of books on display.

They had everything from traditional American textbooks to Hindu comic books to Japanese faerie tales.

A few of the books on display were books I remembered reading as a kid, like the Little Golden Books series. Most were older. Some were a lot newer, though, like the Harry Potter series. I’ve seen the movies and I’d like to read those books when I get a chance too. According to the display, Harry Potter books are the fastest selling of all time. My wife says it’s because the books appeal to kids, teens and adults, so the audience buying them is a lot bigger. Makes sense to me.

I’ve always been fascinated by books. I guess that’s a good thing, considering the field I chose to pursue in college. I just placed an order for 17 books for one master’s history class for this Fall semester. Woot woot! I have so many books I’ve run out of shelves to put them on. I’ve given away lots of books to charity in the past when my collection became too cumbersome to take with me when moving, but this time most of my books are history books or books on religion, politics, sociology and anthropology. In other words, they’re all books I’ll probably need in the future as a student and teacher. I suppose there are worse things to have too many of in your house!

Gallery of more photos from the children’s book exhibit:

A book on doll making.

A Hebrew Alef-Bet Book. Alef and Bet are the first letters of the Hebrew Alphabet.

A strange Alice in Wonderland puppet with a neck that extends and retracts.

A strange Alice in Wonderland puppet with a neck that extends and retracts.

The original Winnie the Pooh and Friends

A page from a previously banned book that depicts the marriage of a white rabbit to a black rabbit, called The Rabbits’ Wedding by Garth Williams, originally published in 1958.

Where the Wild Things Are

I’d forgotten about this place until I started going back through my photos.  Last week, my wife and were walking down 11th Street.  I don’t recall where we were going, but we saw a flea market and stopped in to look around.  I’d always thought of flea markets as being a uniquely ‘Southern’ thing and I’ve been to quite a few.  I have this vague memory of being at one where a guy had a stall set up to sell animals.  I remembering seeing snakes.  I have no idea how many years ago that was.

I asked around a bit and this flea market is set up once a week.  The space it covers is pretty big, which made me wonder how much each individual seller pays the lot owner for the time they spend there.

If I had more time and more space, I would probably pick up some of the things they sell there, specifically books.  I hardly have time to read the ones I have, though, given how much I read for classes I’m taking.  I also saw some bicycles near the front entrance.  I think I want to get bicycles for myself and my wife again.  It would be fun to ride around Central Park and the bike paths that go around Manhattan.  I don’t think I’d want to ride inside the city though and especially not on busy roads.  Too dangerous.

On the way out, this guy saw me taking photos and indicated that he wanted to post for the camera, so I humored him and I’m happy with how it came out.  He looks pretty slick.

I saw this old fashioned taxi cab parked on the side of the road.  I assume it’s still being used, but I could be wrong.  Maybe someone bought it and is using it as a personal vehicle and they enjoy the novelty of driving it.

I don’t ride in taxis much here.  They’re way too expensive.  With a little foresight and time management, you could save yourself 20 dollars or more and just take the bus or train.  I guess a lot of people do use them though, because sometimes I get the impression that there are more taxis on the roads here in the city than any other types of vehicles combined. 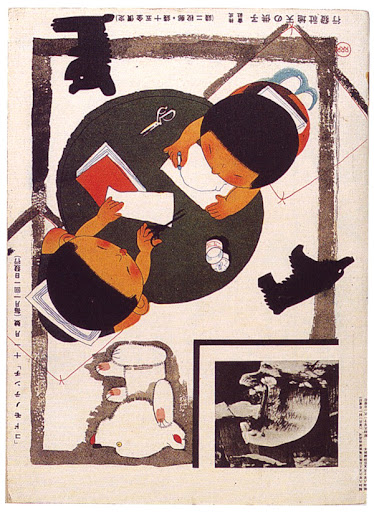 Back cover of an issue of Kodomo no tenchi magazine, 1934

These images are scans from the personal collection of ‘Will’, a book collector with an obsession for illustrations and graphic designs from around the world.

To see the rest of the set, please visit the original post on his blog:  A Journey Round My Skull.

Old illustrations and old books in general are fascinating to me.  I actually have some old Sears catalogs from the 70s that I want to look through and maybe post some pictures from.