A recent article in The Straits Times is advising citizens to act quickly to reserve their dosage of H1N1 vaccine.  The Ministry of Health is currently surveying clinics to see how many doses will be needed to satisfy demand.  So, clinics are compiling lists of clients who are interested in getting their shot this year, at a cost of 20 to 40 SGD, depending on your doctor and clinic.

An excerpt from the article:

Singapore will receive all 1 million doses it bought from British pharmaceutical company GlaxoSmithKline by Christmas, Mr Khaw said on Sunday at a brisk-walking event organised by the North West Community Development Council held at the Republic Polytechnic.

About 20 per cent of the vaccines will be reserved for essential personnel such as health-care workers and the police. The remaining 800,000 doses will be distributed at cost to hospitals, polyclinics and GPs in private practice.

Mr Khaw also sought to allay fears that Singapore will face a shortage of vaccines like what the United States may soon be experiencing with the traditional winter flu season approaching.

Having the swine flu is a horrible … horrible… horrible… experience.  I had it myself, a few months ago.  It’s weird too.  I woke up at a regular time that day.  I sat around doing my regular things.  Then at around 5 PM I washed up and went to Century Square in Tampines to meet my wife for dinner and a night out.  Only, things didn’t go quite as planned.  When I got out of the taxi I felt a little tired, which was weird since I’d had about 10 hours sleep the night before.  I thought maybe I’d just slept too much so I shrugged it off and went into the mall.  It was a cool night outside because it was overcast and had been raining so when I walked into the mall I wasn’t at all surprised to feel the blast of icy cool air. 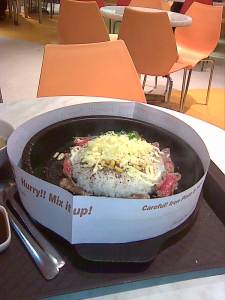 It was after I’d been standing inside for a few minutes that I realized something was a bit off.  It felt too cold, like I was standing outside in the Fall in New York City.  I didn’t just feel cool or cold.  It felt icy, to the point that I was shivering.  I was really tired too.  I really wanted to sit down, so I went back outside to the taxi stand area and sat on the railing.  It felt better outside and it was nice to sit down for a while.  When my wife showed up we went to eat in the food court, but I just couldn’t manage to enjoy my meal.  I felt really cold and my appetite was starting to disappear.  We grabbed a few things from the grocery store and then took a cab home.  My wife could tell I wasn’t feeling well.  I normally devour that beef pepper rice!

We got home around 7 PM.  By 9 PM I was laying in bed, feverish.  By 1 AM my fever had risen to 38.5C / 101.3F and the following morning at 7 AM it was 39.5C / 103.1F.  I spent the next two days in and out of consciousness.  Usually, when I had fevers I knew I could only tell by the thermometer.  This time even I could notice the heat coming from my face and head.  A cool towel and a fan helped that.  I did a lot of sleeping… and I remember my cats sitting next to me while I was struggling.  That was nice of them, to come check on me.  And of course, my wife took care of me by feeding me, making sure I took meds, and frequently checking my temperature.

After that sort of experience I never want to have swine flu again.  Just like with any virus, there are different strains of it, and having one doesn’t mean you’re safe from all of them.  On the other hand, more people die each year from the regular flu than from swine flu.  I suppose the media frenzy was just their way of cashing in on people’s fears over a new virus.  First it was bird flu, then swine flu.  What’s next? Dog flu?  So, I’m not exactly frothing at the mouth to be the first in line for a swine flu shot.  Plus, there’s data to suggest that the swine flu shot may in fact be dangerous and may make you more likely to become sick with the swine flu.

From an article on Mercola.com, a health and wellness site:

A series of studies suggests that people who got a seasonal flu shot last year are about twice as likely to catch swine flu as people who didn’t.

And then there’s this news report of a case of dystonia that was potentially caused by receiving a swine flu vaccine:

So, I think I’ll just take my chances.  I survived the swine flu once.  I’m sure I can do it again. And there are plenty of people that don’t take swine flu shots that don’t get the flu.