This applies mostly to tables at hawkers, since you’re seated as usual in a “sit-down” restaurant by a host.

In a hawker center (take that to mean food court and kopitiam as well) there are a lot of people trying to eat and there usually aren’t enough tables to go around.  In Singapore, it’s not uncommon to get your food, turn around, and then realize there’s no where to sit, especially at high traffic times during lunch and dinner hours.  You might stand around for quite a few minutes looking for a spot for yourself and whoever might be with you.  That can be really frustrating and sometimes you wind up eating with strangers, which doesn’t seem to faze locals, but was uncomfortable for me at first.  In food courts in the US you eat at your own table with your own friends and family and that’s it.  There aren’t any strangers buddying up next to you.  It’s awkward and unwanted and depending on who you try it with you might get whacked in the head for your trouble.

Singaporeans have a solution for their dilemma.  They call it “choping”.  Basically, it’s a way of reserving a seat in advance.  If you’re from the US, the term “dibs” is about the same.  If you chope a table, you’re calling dibs on that table, though it’s taken a bit more seriously here.  By the way, in Singapore “Dibs” are ice cream bon bon things. 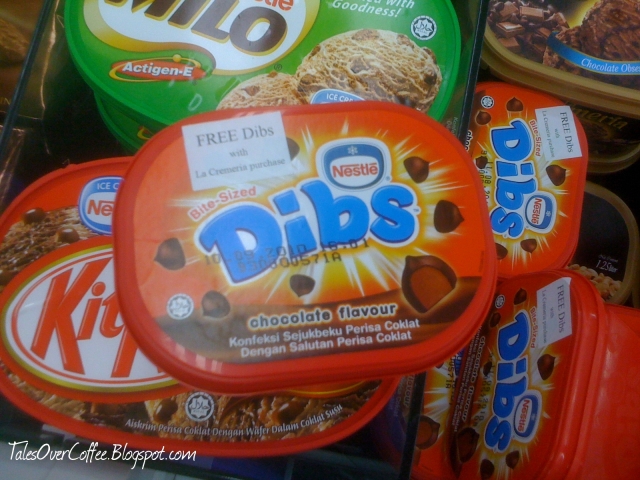 I call dibs on these Dibs.

The way it’s typically done is by leaving a travel-sized packet of tissue on the table.  If you’re wondering why people would all have tissue on them (other than women, who have everything under the sun in their bags), it turns out that at hawker centers it’s incredibly rare to be provided with a napkin to go along with your meal.  The only place I know of that does it is a Western-style hawker stall called Amigos in Pasir Ris.  So, if you’re a local and you’re going to the hawker you have tissue with you.  You deposit this tissue onto the table to claim it as yours and then you go get your food.  This practice ties in with Singapore being safe because in a lot of places if you left your tissue on the table (and it was obviously not used) it would disappear before you got back.

I’ve seen some posts on the internet about Singaporeans having a fit because foreigners don’t respect their “chope”.  Luckily, most of them are smart enough to realize that choping is a local custom and the foreigners more than likely just didn’t know what the tissue was doing there, or thought it was tissue provided by the hawker.  I recall sitting down at a table that had a packet of tissue on it once.  I even pocketed the tissue.  I guess some one ate their lunch in brooding silence that day.  It wasn’t until I’d been in Singapore for about a year that I learned about choping.

Nowadays I think the practice is starting to fade out and is being replaced with a more familiar way of claiming a table.  Someone from the group simply sits at the table and claims it while other people go get their food (and hopefully that person’s food as well).  But, if you find yourself standing, looking out over a huge crowd of seated people, remember what the tissue on the table means!