The most used entrance and exit for the Somerset MRT station is the one that opens into the new 313 @ Somerset mall.  Even before that mall was there, that entrance was still the most used since it opened onto Orchard Road, which is the main shopping strip in Singapore.  I actually never even knew there was another entrance and exit until I was directed to go back into that area to find an iPhone armband for jogging at the SingTel store.

The area that surrounds that MRT entrance is very green, with tall trees and lots of grass. There’s also a skate park there.  It has half-pipes, rails and ramps, at least that I noticed.  It looked like a good place for people to hang out.  The idea of skateboarding there wasn’t what caught my attention though; it was the graffiti.

Graffiti isn’t something you see in Singapore all that much to start with, and you definitely don’t see graffiti of the quality that’s on display in this skate park.  As we passed by I snapped a few shots. 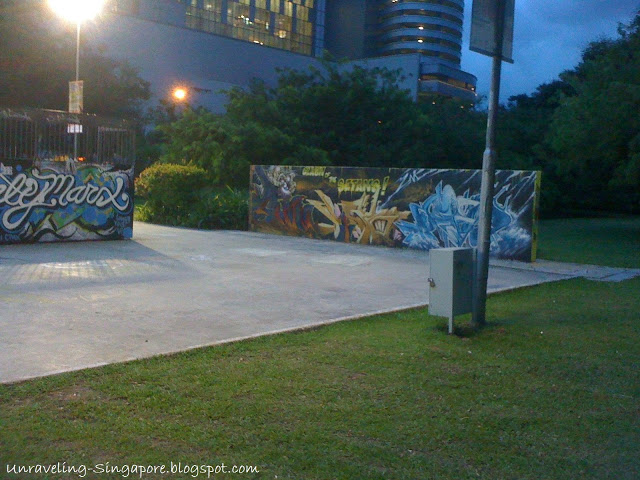 I don’t have a problem with graffiti.  I think it’s pretty cool, as long as it’s tastefully done on public areas, rather than people’s businesses or personal property.  It’s a great method of self expression and goes a long way towards cultivating artistic talents.

5 thoughts on “Graffiti At the Somerset MRT Skate-Park”