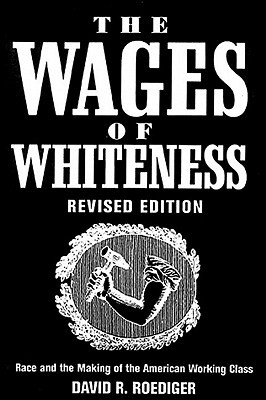 “Irish-American Workers and White Racial Formation in the Antebellum United States,” which is chapter 7 of The Wages of Whiteness: Race and the Making of the American Working Class, by David Roediger, “Whiteness, Racism, and Identity,” by Barbara Fields and “Whiteness Studies: The New History of Race in America,” by Peter Kolchin all address the development of ideas of racial identity in the United States. Fields’ work incorporates ideas from Roediger’s earlier book, while Kolchin in turn incorporates their ideas, along with those of Matthew Frye Jacobson into his critique of whiteness studies up to that point. The works reviewed were all written in period covering roughly 10 years, between 1991 and 2002, and are, according to Kolchin, representative of the first decade of a new type of literature addressing the concept of whiteness in American history.

The chapter from David Roediger’s book focuses on the Irish immigrant experience and the racism that they faced. Roediger argues that the Irish were not seen as white and implies that they were considered black. He couches this argument in terms of class conflict and attempts to establish that the Irish differentiated themselves from blacks by pushing blacks out of the labor markets they occupied while simultaneously trying to add respectability to those positions by changing the terminology used. It seems as if Roediger was arguing that the Irish were primarily responsible for their inclusion in the idea of “whiteness”. Roediger also falls into the trap of racial essentialism by claiming that the Irish were predisposed to racist attitudes because of their adherence to Catholicism and their dislike for the British.

Barbara Fields challenges Roediger’s idea by stating that it is impossible for a group that is being subjected to racism to negotiate that racism; they can only challenge it and attempt to navigate the obstacles that are created as a result of the construction of a racist idea about who and what they are. In other words, Fields sees whiteness and race as a cover for racism, because it defines categories and places people in them regardless of their personal identity and in spite of their agency. A portion of Roediger’s work actually supports Fields’ later argument, because he notes the role of the Democratic party in redefining the role of the Irish in American society. The Democratic party recognized the Irish population as an important voting bloc that they could use to maintain power. While the Irish had positioned themselves to be more easily accepted as being on par with native American whites, it wasn’t until they were seen as useful politically that they were granted an equal status.

Further, Roediger seems to premise his work on the idea that the Irish were not seen as white. However, as Peter Kolchin later points out, this is not the case. The Irish were admitted into the country as “whites” and, while the Irish were looked down on, it isn’t necessarily because their color was in question. Kolchin believes that there were other factors that were more important, like the perceived conflict between Irish Catholicism and Protestant American Republicanism. It would also be reasonable to believe that Irish immigrants, coming from a preindustrial lifestyle, and admittedly being called savages, were considered educationally and technologically inferior. They had no skilled labor to speak of and, according to Roediger, performed the most menial work available. It is as if an informal caste system had developed, in which black Americans and the Irish were vying for the bottom rung.

Roediger asks a related question that is somewhat odd, in that the answer should be evident. Why did the Irish identify blacks as the group they should compete against rather than other white ethnic groups? Fields states that whiteness equals white supremacy and European immigrants become white by adopting white supremacy, which results in material rewards. So, the Irish would have attempted to become white by adopting white supremacy. Roediger’s work shows that the Irish did proactively adopt racist rhetoric at the least. However, this contradicts Fields’ own argument about people not having any agency at all in their racial designation. An easier explanation might be that water takes the path of least resistance. Not only were black Americans easy targets who could be attacked with little fear of repercussion, they were directly competing with the Irish for jobs.

Sexual relations are a topic that comes up frequently in Roediger’s reading. He focuses heavily on the fact that biracial sexual relations were looked down on and came up frequently as a “danger” of racial equality, but he does not go into detail (in the chapter reviewed, at least) as to why these sexual encounters were thought to pose such a great risk to American society. The answer becomes clear in Kolchin’s work, where Lincoln indicates that, while blacks should be entitled to the fruit of their labor, he felt that they were inherently inferior. This idea remains prevalent in some segments of society today, which is ironic given the myth of the United States as a “melting pot.” How does a pot of varied ingredients melt together without mixing?

Of the works covered, Kolchin’s raises the most important points in terms of how whiteness and race in general should be addressed in the future. Should race as a category be abolished, or should whiteness be redefined, or should white as a category be abolished and what would that mean for those people that traditionally identify that way? Would abolishing white as a category just create space for another category with the same meaning to take its place? And how does one modify the attitudes of just one group of people? An interesting path of research would be to look at what it meant to be “white” at specific periods of American history and see if those ideas match up with what people thought it meant to be American.